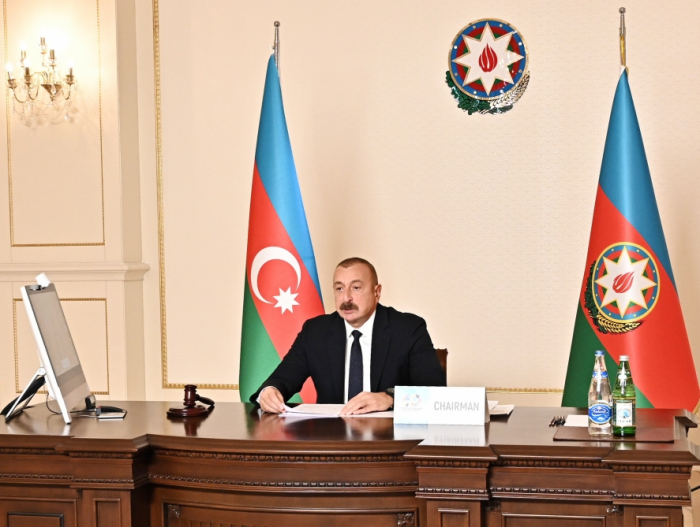 "Unfortunately, double standards and selective approaches applied with respect to the norms and principles of international law and decisions of international organizations have been negatively affecting the fair and just settlement of conflicts throughout the world. Azerbaijan has also been affected by such a selective attitude for the last three decades,"Azerbaijani President Ilham Aliyev said.

The head of the state made the remarks addressing a High-Level Commemorative Meeting marking the 60th Anniversary of the Non-Aligned Movement (NAM) in a video format.

"Benefiting from the double standards thriving in international relations, Armenia, in blatant violation of norms and principles of international law, was able to keep under occupation almost 20 percent of the territory of Azerbaijan for about 30 years; conducted ethnic cleansing against Azerbaijanis, both in its own territory and in the occupied territories of Azerbaijan; committed Khojaly genocide in February 1992, killing hundreds of civilians including 106 women and 63 children; violated basic human rights, including the right to return of more than one million of Azerbaijani refugees and IDPs," President Aliyev said.

The head of the state added: "However, Armenia did not face any sanction for its military aggression and refusal to implement the four resolutions adopted by the UN Security Council in 1993, which demanded immediate, complete, and unconditional withdrawal of armed forces of Armenia from Azerbaijan’s occupied territories. No difference was made between the aggressor state and the state that has faced an occupation. On the contrary, Armenia was consolidating the occupation, committing war crimes, conducting illegal settlement and illicit exploitation of natural resources and destroying the cultural and religious heritage of Azerbaijani people."

"Inspired by impunity, Armenia went even further through threatening Azerbaijan with a new war for new territories and resorting to military provocations along the state border and the former line of contact.

On September 27th 2020, Armenia launched a large-scale military attack against Azerbaijan. In response, Azerbaijani Army conducted a counter-offensive operation in its own territories and liberated its occupied territories.

Totally defeated in the course of the 44-day Patriotic War, Armenia had to sign an act of capitulation on 10 November 2020. Azerbaijan, by itself, ensured the implementation of the abovementioned UN Security Council resolutions; resolved the 30-year-long conflict and restored its territorial integrity and historical justice by military-political means. The Nagorno-Karabakh conflict is left in the past.

During the time of occupation, Armenia deliberately destroyed cities and villages, all cultural and religious sites of Azerbaijan in the occupied territories. The aim of Armenia was to erase the traces of Azerbaijani people living in these territories for centuries," Azerbaijani President stated.