What we know about Covid-19 jabs for kids - iWONDER 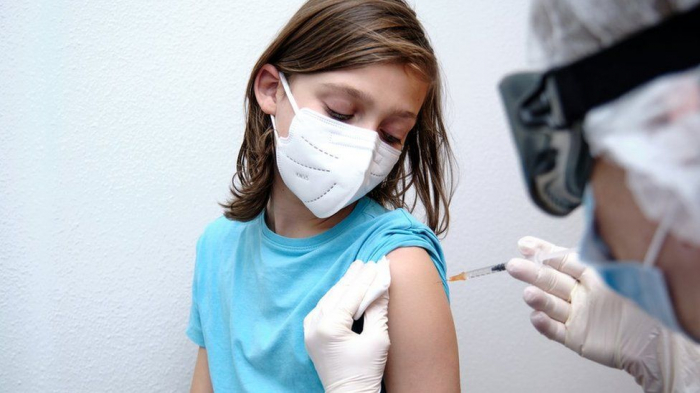 In Israel, more than half of those over 12 years old and some younger children have had a single dose of the Covid-19 vaccine – with a few already onto booster jabs. What can we learn from this?

In late August 2021, Talia Shmuel took her five-year-old son to their local health clinic in Jerusalem, Israel, for his first vaccine against Covid-19. He was born with a heart defect, and as a side effect has a severely narrowed windpipe, which makes him particularly vulnerable to the disease. "Any time he gets sick, it generally turns into pneumonia," Shmuel says. "And he gets sick a lot."

Shmuel, a mother of three, needed special authorisation by Israel's Ministry of Health to have her son vaccinated, because of his young age. She felt excited, and confident that it was the right choice. "My husband and I are both research analysts, and we look at every single number that comes across; we are tracking everything," she says. "We check multiple different sources. From the numbers, yes, there are possible side-effects [of the vaccine]. However, the side-effects of Covid-19 are significantly worse for him."

As more and more countries around the world are beginning to offer Covid-19 vaccines for children over 12, Israel offers a glimpse of what the future may hold. The country rapidly vaccinated a large part of its adult population earlier this year. In June, it recommended vaccinating children over 12, after outbreaks in schools – and is now already offering third doses as booster shots for that age group. Since July, it has also offered vaccinations for children aged 5-11 "in exceptional circumstances", including severe chronic lung illnesses and congestive heart failure. But while the Pfizer-BioNTech vaccine has been shown to be safe for children, the decision can be more complex than for adults. Since children tend to be less affected by Covid-19, even a small number of adverse reactions to the vaccine can make it harder to justify the jab.

"The vaccine works," says Nicole Ritz, a specialist in paediatric infectious diseases at University Children's Hospital Basel in Switzerland. "But same as we have done for 12 to 18-year-olds, you need even more caution as you [decrease] in age. Potentially, this is going to be a vaccine which we give in the first year of life, as we do with many other vaccines. The more you [decrease] in age, the more you need data which shows you that this is a safe vaccine. And it's going to be more difficult [to collect that data] because a five-year-old is much less likely to tell you, 'I have a strange feeling in my heart, I don't feel happy today,' than a 16-year-old."

Israel's roll-out of the vaccine for children has been relatively smooth. To date, it has vaccinated more than half of 12 to 15-year-olds. A very small number of people have taken to the streets for sporadic protests. Most Israeli parents, however, appear willing to vaccinate their older children: By October 2021, 53.7% of children aged 12 to 15, and 84% of 16 to 19-year-olds, had received a first shot, according to the Ministry of Health's Covid-19 dashboard.

Asked how they felt about the vaccine for younger children, including those without background illnesses, several parents showed enthusiasm. They cited their fear of their kids getting infected, anxiety about incipient lockdowns, burn-out over frequent quarantines and home-schooling, unease about their kids falling behind in school, or the inability of their kids to learn remotely – whether because they find it difficult to focus or due to lack of screens that enable kids to access Zoom.

The rise of the highly contagious Delta variant has fuelled such fears of future lockdowns.

In mid-June 2021, Israel lifted its indoor mask mandate, citing a successful campaign to fully vaccinate about 60% of its total population. Among the elderly, who are most at risk from Covid-19, that proportion is even higher – almost 90% of Israelis over 70 are vaccinated. Ten days later, as the Delta variant spread, the indoor mask mandate was back in place. By late summer, the Delta variant was dominant in Israel.

After Israeli public schools opened on 1 September, the number of children testing positive for Covid-19 began to rise dramatically. Over the course of the month, slightly more than 54% of positive tests in Israel were in children aged zero to 19, according to the Israeli Ministry of Health's Covid-19 dashboard. Some children were quarantined after a single day of school. For the second year in a row, Israelis who had planned to observe the Jewish New Year indoors in synagogue found themselves organising impromptu outdoor prayer services in local parks. They blew the traditional ram's horn, or shofar, under the trees as passing joggers paused to listen.

Vaccinating children could help break that cycle of optimistic re-openings followed by Covid-19 surges and setbacks, some experts say.

"I believe – and I've said it all along – that we need to vaccinate children in order to control the pandemic, from as early an age as possible," says epidemiologist Manfred Green, professor in the School of Public Health at the University of Haifa in Israel. Very early in the pandemic, he explains, "we knew that this was a very transmissible disease; now it's become more transmissible with Delta." Public health officials had hoped that if 60% to 70% of the population had immunity, the pandemic could be controlled, he says. They now realise that that percentage has to be much higher. Vaccinating children would "diminish that pool" of non-immune people in the population.

As children congregate in schools, they can spread the disease, Green adds. If infected, they are likely to be asymptomatic or experience only mild symptoms, but that does not mean all children brush off the disease easily. In the United States, hospitalisations of children and adolescents rose nearly five-fold during late June to mid-August 2021, as Delta was becoming dominant, according to data from the US Centers for Disease Control. In Israel, of all patients in a serious condition in October, between 0.2 and 0.5% were children aged zero to 19. A total of 12 children aged zero to 19 in Israel have died of Covid-19 since the start of the pandemic, according to the Ministry of Health's Covid-19 dashboard.

Children are also at some risk of prolonged symptoms after infection, mostly headaches and fatigue, known as "Long Covid". Although reports vary, a recent study of 258,790 children aged five to 17 found that, in the UK, between 2% and 4% of 1,734 children who tested positive for Covid-19 experienced such longer-term symptoms. In Israel, a similar study found that 11% of 13,864 children aged three to 18 who had recovered from Covid-19 reported long-term symptoms including disturbed sleep and problems concentrating; some of these effects, the study's authors say, could result from prolonged lockdowns and school closures.

Given these factors, "it makes a lot of sense," Green says, to vaccinate children aged 5 to 11, and possibly at even younger ages, even without underlying conditions. From Israel's experience of vaccinating children aged 12 to 15, "the lesson is that the vaccine has a good safety record. There are not a significant number of severe adverse effects", he adds.

Between one in 3,000 and one in 6,000 males aged 16 to 24 who received the Pfizer-BioNTech vaccine in Israel developed a rare heart muscle inflammation called myocarditis, but Green insists that it is "almost always" a treatable condition, although it may require hospitalisation. That side effect may also have to be seen in the context of the dangers of a Covid-19 infection. An Israeli study of adults aged 16 years and older found that the risk of myocarditis was "substantially increased" after infection with Covid-19, compared with its incidence after vaccination.

"Vaccinating children under the age of 12 years raises difficult medical, ethical and social issues and questions," Adi Niv-Yagoda, an expert in health policy at Tel Aviv University and a member of the Israeli Health Ministry’s Covid-19 advisory panel, wrote in an email. "On the one hand," he says, "vaccinating children between the ages of five and 12 years can be very helpful in dealing with the spread of Covid-19 morbidity and reducing the dimensions of the corona epidemic. On the other hand, the natural concern [is] about possible future health consequences."

Those concerns are echoed by Nicole Ritz of University Children's Hospital Basel. "Do you vaccinate the younger kids to protect themselves or do you vaccinate them to protect society?" asks Ritz, a pediatric infectious disease specialist who has treated between 20 and 30 children and adolescents with PIMS (paediatric inflammatory multisystem syndrome), a rare and severe syndrome which occurs in less than 0.5% of children who have (or who have had) Covid-19.

If the disease remains benign in most children, then only a small group of them prone to severe illness – those with risk factors like obesity, diabetes or lung diseases – will potentially benefit directly from vaccination, Ritz explains. But if the only benefit of immunising kids is to protect their grandparents, then "that vaccine has to be extremely safe", she says.

Ritz points to a recent CDC report on Covid-19 safety in adolescents aged 12 to 17, which followed up on 8.9 million US adolescents who had received the Pfizer-BioNTech vaccine. Their Vaccine Adverse Event Reporting System (Vaers) received 9,246 reports of adverse events following vaccination, a rate of one out of every thousand patients vaccinated. More than 90% of these adverse events were "non-serious" events like dizziness and headache. The remainder, or 9.3%, were for serious adverse events, including chest pain, vomiting, fever and myocarditis. "No reports of death to Vaers were determined to be the result of myocarditis," the CDC report notes.

Yet the rise of the Delta variant has also prompted some researchers to change their position on vaccinating children.

"Given the rise of the Delta variant, it is now more urgent to vaccinate children 5 to 11 when those [clinical] trials are complete and the vaccine is shown to be safe and effective," infectious diseases physician Monica Gandhi of the University of California, San Francisco, told the BBC in an email. Earlier this year, she had not seen the need to vaccinate that age group, but Delta had changed the picture: "With its higher transmissibility, I would favour vaccinating younger children to help protect those in the household and especially older adults."

Green concurs. "I know that some people will say, 'why should children get a vaccine that's not going to help them individually and only going to help society?' The answer is that children are not some kind of species that live outside of society. They are part of society. If their parents get ill, or their grandparents, or their neighbours, that affects them as well."

For parents, it can be difficult to make a confident decision amid the slew of studies and statistics. But some simply feel relief – and a growing sense of hope.

"I would get my under-12s vaccinated in a hot second if I could," says Gila Rose, a freelance writer and editor in the Israeli town of Modiin. She has an 18-year-old and a 15-year-old (both of whom are vaccinated) as well an 11-year-old and almost-seven-year-old twins. Rose cites the rise of the Delta variant, as well as repeated lockdowns and quarantines, as reasons for speeding up vaccinations of younger children.

School closures are taking their toll, as well. "Kids are really suffering," she says. "It was one thing when we thought it would be a few months, or a year. But now we're heading into our third messed-up school year."

Rose has "no qualms" about vaccinating her younger children, seeing the jab as a "get out of quarantine free" card: "I will be first in line with my children. Maybe this is the thing that is finally needed, to turn the tide," she says.