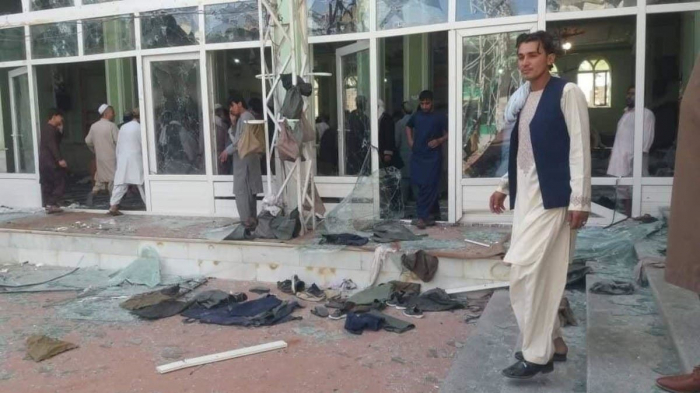 Death toll as a result of the mosque blast in Afghan city of Kandahar reaches 62. 70 others injured in a suicide bomb attack that hit a packed Shiite mosque in southern Afghanistan.

At least 16 people are dead and 32 injured after an explosion tore through a Shia mosque during Friday prayers in the Afghan city of Kandahar, AzVision.az reports citing BBC.

Pictures from inside the Fatemieh mosque show shattered windows and bodies lying on the ground and other worshippers trying to help.

The explosion's cause is not yet clear but a suicide bombing is suspected.

One witness told AFP he heard three explosions - at the main door, where worshippers wash, and a third blast.

The mosque was full of people at the time of the blast and at least 15 ambulances were at the scene.

Taliban special forces have secured the site and have asked people to donate blood to help the victims, Reuters reports.

BBC Afghanistan correspondent Secunder Kermani says that IS-K, a local branch of the Islamic State Group, was expected to say it was behind the attack.

Last Friday, a suicide attack on a Shia mosque during Friday prayers in the northern city of Kunduz killed at least 50 people. IS-K said it carried out the attack, which was the deadliest since US forces left at the end of August.

IS-K is the most extreme and violent of all the jihadist militant groups in Afghanistan, and is violently opposed to the governing Taliban.

The Taliban took control of Afghanistan after foreign forces withdrew from the country at the end of August following a deal agreed with the US.
It came two decades after US forces had removed the militants from power in 2001.