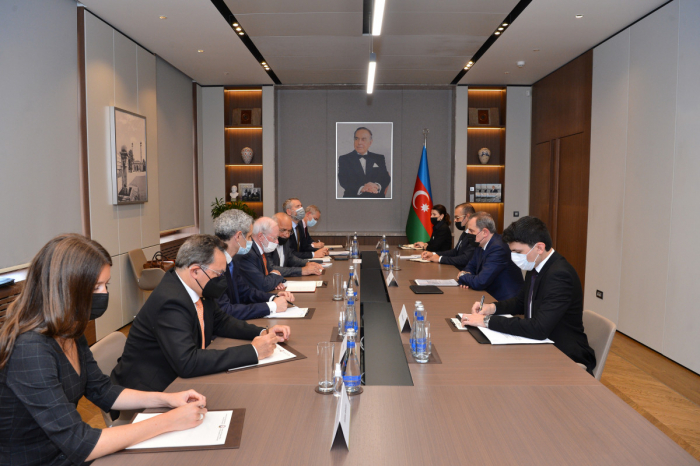 On October 15, Foreign Minister Jeyhun Bayramov received a delegation led by President of the National Commission for the Elimination of Anti-Personnel Mines of France (CNEMA), Gérard Chesnel, AzVision.az reports.

Bayramov spoke about the occupation of a part of the territory of Azerbaijan that lasted for almost 30 years [before its liberation in the 2020 Second Karabakh War] and its serious consequences.

Reminding that last year the Azerbaijani territories were liberated by military-political means, the minister focused on the policy of Armenia on the purposeful contamination of our territories with mines and spoke about the threat of mines in the liberated territories.

He informed Chesnel that the exactness of some mine maps provided by Armenia, which after the signing of the trilateral statement generally denied the presence of minefield maps, is only 25 percent.

Besides, he emphasized that after the end of the Second Karabakh War in November last year, total of 134 Azerbaijani citizens were injured and 33 killed, including two journalists, as a result of mine explosions [in the liberated territories].

The minister also provided detailed information about the situation in the liberated territories, urbicide, culturecide, and ecocide committed by the Armenian side there [during the occupation].

At the same time, he informed the French delegation about the work carried out by the Azerbaijani government towards the restoration and reconstruction of the liberated lands.

Thanking for the reception, the CNEMA representatives provided information on its activities and expressed their intention to cooperate with the Azerbaijani side in the relevant field.