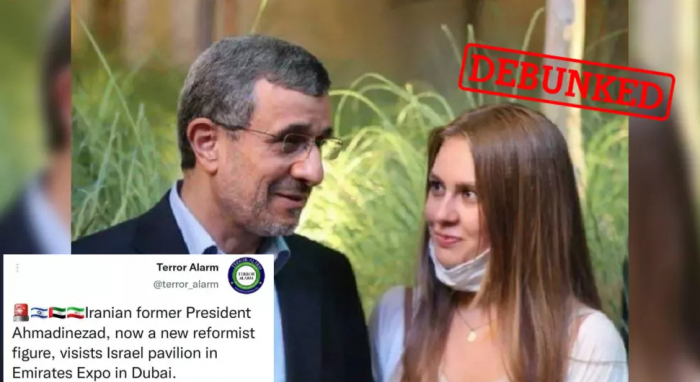 Former Iranian president Mahmoud Ahmadinejad made waves with a visit to the World Expo, in Dubai, in October. Ahmadinejad posed for photos with a number of young women, to the consternation of both people on social media and the Iranian security forces, who were reportedly unhappy about his behaviour. Ahmadinejad’s visit also gave rise to a fake news story, that the former Iranian president had visited a pavilion run by his arch-rival Israel.

Ahmadinejad's trip to Dubai was the first time he's left Iran since the end of his presidency in 2013. The former president travelled to the United Arab Emirates to participate in a conference held as part of Dubai’s World Expo, which was launched October 1, 2021 and will continue until March 31, 2022. Ahmadinejad, known as an ultra-conservative, was photographed with his wife, several Iranian political figures, and also with some beautiful women.

Iranian social media users were quick to pick up the photos and expressed surprise at the “reformed” image of one of the most radically religious presidents since Iran’s Islamic Revolution. Other people were confused by the people posing for pictures with him and wondered if they actually "knew who he was".

Did he actually visit Israel’s pavilion?

There was a lot of chatter on Persian and Arabic social media channels about one photo in particular, showing Mahmoud Ahmadinejad with a young white woman with light brown hair. The photo was first posted by the Twitter account @Terror_Alarm – which claims to be an independent media outlet based in Jerusalem – along with the caption: “Iranian Former President Ahmadinezad [sic], now a new reformist figure, visists [sic] Israel pavilion in Emirates Expo in Dubai.”

During his two terms in office, Mahmoud Ahmadinejad took extremely hostile positions towards Israel, once comparing the country to “a cancerous tumour”.

However, there is no sign that Ahmadinejad visited Israel’s pavilion in numerous articles and images documenting his visit to the Expo.

The rumour was quickly denied by the director of Ahmadinejad’s cabinet, who said that the photo in question had been taken at Vietnam’s Pavilion on October 13, not at Israel’s pavilion. The Israeli Ministry of Foreign Affairs confirmed this information on October 17.

Ahmadinejad ended his visit to the Emirates early, apparently due to pressure from Iran. Media outlet Iran International reported that the Iranian Consulate cancelled a press conference scheduled for Ahmadinejad on Sunday, October 17 because he was returning to Iran that same night – earlier than anticipated.

However, according to Fars, a news agency aligned with the Iranian government, Emirati authorities “asked Ahmadinejad to leave the territory urgently” without explaining why.

Several prominent Iranian religious figures, including Hojatoleslam Abbas Amirifar, hypothesized that Ahmadinejad wanted to be “centre stage again” and that this visit was a way to “get media attention” after “disappearing from the political scene".