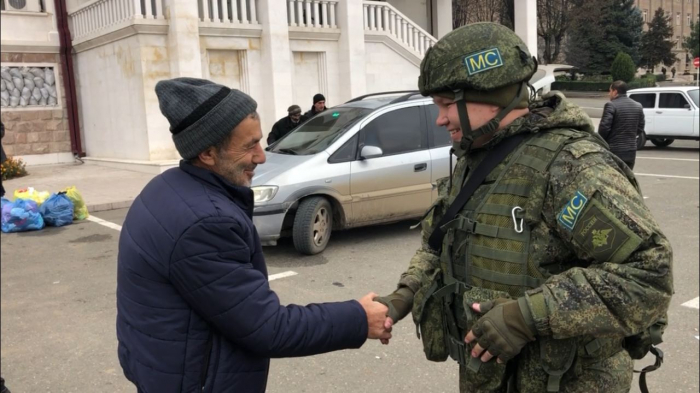 Armenian media outlets have recently reported that Russian peacekeeping forces, temporarily stationed on the territory of Azerbaijan, are very concerned over the “rapid emigration of Armenians from Karabakh”.

According to Armenia’s Hraparak daily, they [the Russian government and peacekeeping forces] “believes that the demographic picture of Karabakh will change as a result of emigration, whereas a land where people don’t live will no longer need to be protected.”

“They are well aware that Azerbaijanis are growing like locusts and penetrating every nook and cranny. When the 5-year term of deployment of the Russian peacekeepers expires, the question of their further presence may remain unanswered,” the daily writes.

Armenians’ worries are not in vain. Although the Russian peacekeeping contingent, in its press releases, strives to report on the alleged mass return of Armenians to Khankendi, Aghdara, Khojaly or Asgaran after the signing of the trilateral statement on Karabakh, the reality is quite the opposite. The preliminary information released by the UN Refugee Agency last winter regarding the total number of Armenians leaving and returning to Karabakh refutes the statistics based on the data by the Russian peacekeeping contingent. The UN agency’s estimates suggest that as many as 24,993 “refugees” were brought by bus from Yerevan to Khankendi on January 26, 2021. However, the Russian side keeps insisting that the number of Armenian returnees stands at 50,000.

Azerbaijan’s regular monitoring of the Lachin corridor proves that the number of Armenians leaving Karabakh is higher than the number of returnees. Armenians are in rush to carry their equipment, mainly trying to sell real estate once seized from killed or expelled Azerbaijanis.

Karabakh Armenians are well aware that once the jurisdiction in the liberated Azerbaijani territories is fully secured again, they will automatically be deprived of the property they had seized. Therefore, taking the advantage of the Russian peacekeepers deployed in Karabakh, Armenians decided to sell at an affordable price everything they could take with them.

One fact cannot be forgotten: in the abovementioned part of Azerbaijan, there is not a single Armenian family whose members were not involved in ethnic cleansing against the Azerbaijani population or did not separatist groups. This means that all military criminals will sooner or later be brought to justice under Azerbaijani laws. Of course, if they don’t leave the Azerbaijani territory permanently until then. The Armenian side is well aware that during the period of their mission, the Russian peacekeepers will be a guarantor of the “immunity” of such elements, and the latter will openly voice their concerns through so-called media.