Just over 400 light-years away, a baby exoplanet is making its way into the Universe.

This, in itself, is not so unusual. We've detected thousands of exoplanets – planets outside the Solar System. Presumably they all had to be newborn at some point too. What makes this exoplanet special is that astronomers obtained a direct image of it – an almost vanishingly rare feat.

It's named 2M0437b, and it's one of the youngest exoplanets for which we have ever obtained a direct image. This could give us a new window into the planet formation process, which in turn could help us understand how the Solar System was born and evolved.

"This serendipitous discovery adds to an elite list of planets that we can directly observe with our telescopes," said astronomer Eric Gaidos of the University of Hawai'i at Mānoa.

"By analyzing the light from this planet we can say something about its composition, and perhaps where and how it formed in a long-vanished disk of gas and dust around its host star."

There are some very excellent reasons we can't easily directly image exoplanets. Compared to the stars they orbit, exoplanets are very small and dim, which means they are usually too faint to be seen with our current telescope technology.

Instead, we usually detect exoplanets based mainly on two effects they have on their host stars. If the exoplanet passes between us and the star on its orbital path, we can detect small, periodic changes in the star's light.

In addition, an exoplanet will exert a faint gravitational effect on the star too (as the bodies orbit a mutual center), causing the star to "wobble" slightly on the spot, causing the wavelength of its light to shift slightly.

These signals are easier to detect when the planet is very massive and very close to the star, so the majority of confirmed exoplanets are massive and on close orbits. But exoplanets on very close orbits are difficult to image directly, because they tend to be vastly outshone by their host stars. 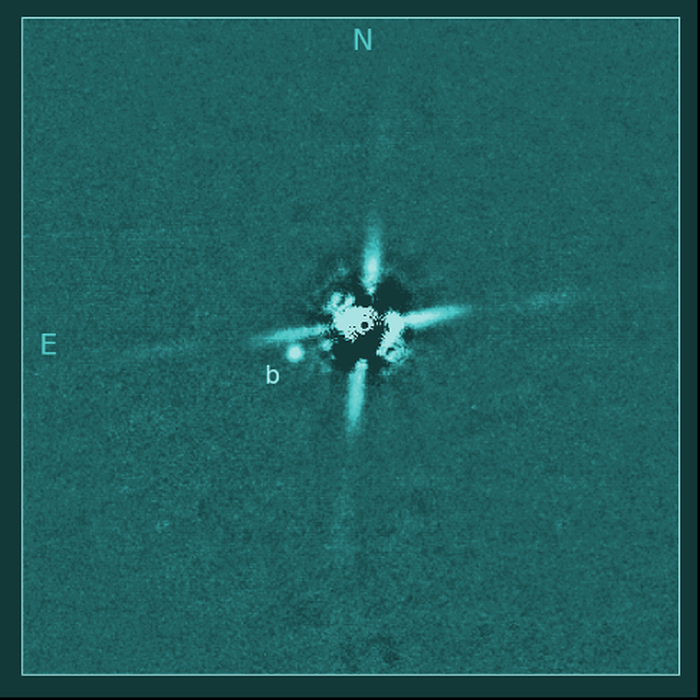 The exoplanet 2M0437b is quite large, but it's also quite far from its host star, 2M0437 – around 100 astronomical units (Pluto is around 40 astronomical units from the Sun). Usually, exoplanets this distant from their star are too cool to give off infrared radiation, but here's where 2M0437b's youth plays a role.

Because it's just a few million years old, the baby exoplanet is still relatively warm from the intense planetary formation processes, around 1,400 to 1,500 Kelvin (1,127 to 1,227 degrees Celsius, or 2,060 to 2,240 degrees Fahrenheit). This means that it glows faintly in infrared, enough to be seen at a distance of 417 light-years away.

It was spotted in 2018 using the Subaru Telescope in Hawaii, and follow-up observations in near-infrared were conducted using the W. M. Keck Observatory. For three years, the research team tracked the star as it moved across the sky, and were able to confirm that 2M0437b was moving with it.

"The exquisite data from the Keck Observatory allowed us to confirm that the faint neighbor is moving through space along with its star, and thus is a true companion," said astronomer Adam Kraus of the University of Texas at Austin.

"Eventually, we might even be able to measure its orbital motion around the star."

The team believes that the young system would be an excellent candidate for follow-up observations using the Hubble Space Telescope. To date, the star and its exoplanet have been observed using Earth-based observatories, which need to correct for the warping effect of Earth's atmosphere on starlight. Hubble does not have this problem.

Such observations should be able to help constrain the properties of the star. We don't know exactly how old it is, or its mass. And they might even be able to detect chemical signatures in the atmosphere of 2M0437b – which in turn could reveal much more information about how it formed.

"We are all looking forward to more such discoveries, and more detailed studies of such planets with the technologies and telescopes of the future," astronomer Michael Liu of the University of Hawai'i said.