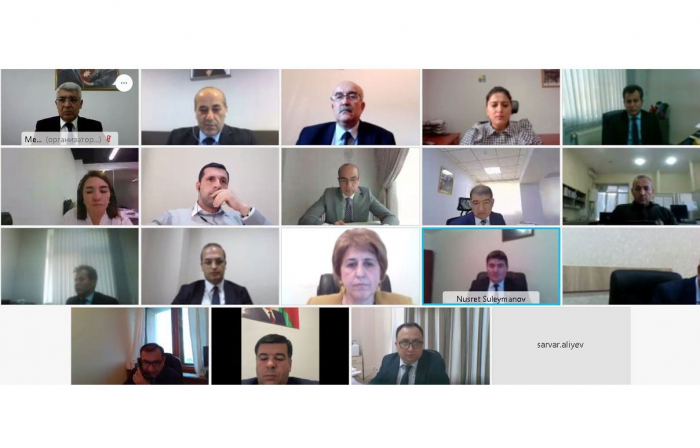 A regular meeting of the Working Group on Environmental Issues of the Interdepartmental Center under the Coordination Headquarters, created for the centralized solution of issues in the liberated territories of Azerbaijan, was held, AzVision.az reports.

The meeting was attended by representatives of the President of Azerbaijan in Shusha and in the part of the Aghdam district liberated from occupation, including the city of Aghdam, the ministries of ecology and natural resources, agriculture, Melioration and Water Management OJSC and other state structures.

It is reported that to assess the environmental situation in accordance with the "Action Plan related to the solution of military-political, socio-economic, humanitarian, organizational and other urgent issues in the liberated territories of Azerbaijan," the members of the working group were informed about the comprehensive monitoring carried out in the liberated territories, including for control over pollution of transboundary rivers.

It was noted at the meeting that the preparation of a plan - a program for expanding monitoring carried out on the Okhchuchay River, which is still being polluted by Armenia, including conducting biomonitoring, identifying indicators sensitive to heavy metals, attracting scientific institutions to relevant research - has begun.

The meeting also discussed issues arising from the decree of the President of Azerbaijan "on measures to organize the activities of the Basitchay state natural reserve" protected natural areas, unique natural complexes and objects.

It was also noted that tree planting events, which are annually organized by the Ministry of Ecology and Natural Resources, this time will be organized on a large scale in Karabakh and East Zangezur in accordance with the goals of improving the environment of the liberated territories.

In addition, the members of the working group were informed about environmental protection issues during the implementation of projects for the construction of road and transport infrastructure in the liberated territories, a preliminary assessment of forest resources on these lands using satellite images.

The working group on environmental issues works in close coordination and exchanges information with other working groups of the Interdepartmental Center.

The Coordination Headquarters, created by order of the President of Azerbaijan dated November 24, 2020, is headed by the head of the Presidential Administration Samir Nuriyev.