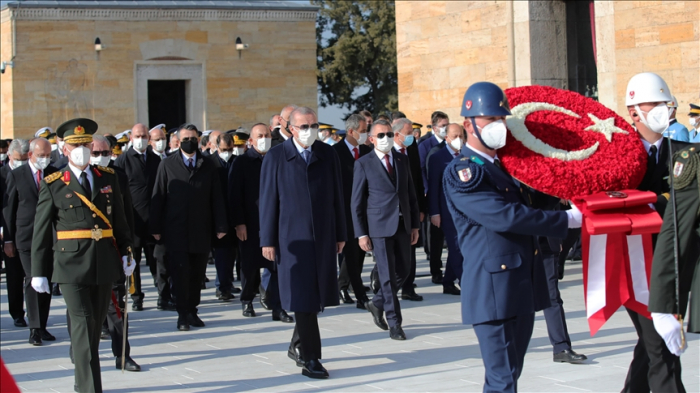 Celebrations in Turkey marking the 98th anniversary of the founding of its republic started Friday with state officials' visit to Anitkabir, the mausoleum of the country's founder Mustafa Kemal Ataturk, in the capital Ankara, AzVision.az reports citing the Turkish media.

President Recep Tayyip Erdogan, who visited Anitkabir to mark the Republic Day, stressed determination to achieve the 2023 goals, when the republic is due to celebrate its centenary.

“As members of a heroic nation with a glorious past full of victories, we are determined to meet the republic with its 2023 goals,” Erdogan wrote in the Anitkabir memorial book.

The Republic Day is being celebrated across Turkey, its representations abroad, and the Turkish Republic of Northern Cyprus.

The government ceremony in Ankara will be accompanied by various events including concerts, marches and fireworks across the country.

On Oct. 29, 1923, Ataturk officially declared the name of the nation and proclaimed the country's status as a republic.

A vote then took place in the Grand National Assembly, and Ataturk, a revolutionary statesman, was elected the first president of the Republic of Turkey by unanimous vote.

Since then, Turkey celebrates the Republic Day on Oct. 29 annually.

Also marking the Republic Day, Turkish Vice President Fuat Oktay said on Friday that the nation protects its independence today as it did in the past, and the country walks resolutely on the road to a powerful Turkey.