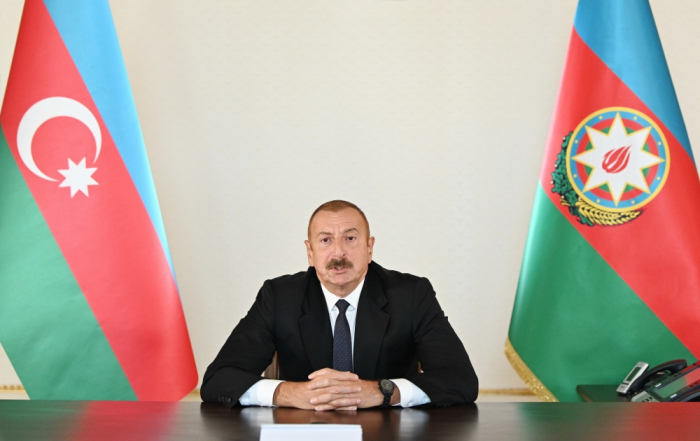 The occupation of 20% of Azerbaijani lands by Armenia for about 30 years has been accompanied by war crimes and crimes against humanity, Azerbaijani President Ilham Aliyev said in his message to the participants of the Baku-hosted first meeting of prosecutors general of the Turkic Council, AzVision.az reports.

The head of state reminded that a policy of ethnic cleansing had been pursued in the de-occupied Azerbaijani territories, and over a million of people had become refugees and internally displaced.

“In 1993, Armenia committed the Khojaly genocide, brutally killing 613 innocent civilians. As a result of the First Karabakh War, about 4,000 of our citizens went missing. Armenia completely destroyed all our villages and cities during the occupation and vandalized our historical, cultural, and religious monuments,” he said.

President Aliyev also noted that Armenia committed an ecocide in the de-occupied Azerbaijani territories, destroying 60,000 hectares of the forests.

The head of state also brought to the participants’ attention that during the Second Karabakh War, the Armenian armed forces targeted Azerbaijani civilians with banned weapons. “As a result of these war crimes, more than 100 civilians, including 11 children, were killed, and more than 450 people were injured. Armenia also used mercenaries and foreign fighters against Azerbaijan. After the war, more than 150 of our citizens were killed and wounded after Armenian-planted landmines exploded.”

The Azerbaijani leader stressed that all these actions of Armenia constitute war crimes and crimes against humanity.

The head of state noted that a new reality has emerged in the region.

“The opening of the Zangazur corridor will make a significant contribution to the development of regional cooperation. I’m confident that the establishment of the Council of Prosecutors General of the Turkic Council member states will give impetus to the reliable protection of human rights and freedoms in our region, unite our efforts in combating all forms of crime and ensure more effective cooperation,” the president added.