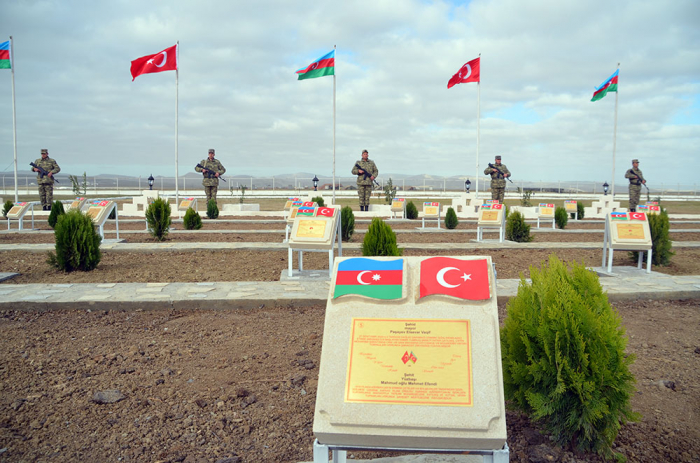 On November 6 an event on the occasion of Victory Day was held in one of the military units, AzVision.az reports citing the press service of Azerbaijan's Defense Ministry.

First, the military personnel and the guests visited the monument to the great leader Heydar Aliyev, laid wreaths and flowers. The memory of the national leader and Shehids(Shehid) who sacrificed their lives for the territorial integrity of Azerbaijan was honoured with a minute of silence.  The military orchestra performed the State Anthem of the Republic of Azerbaijan.

During the event, the representatives of the Ministry of Defense, the public, martyrs' families, ghazis as well as  the military personnel delivered speeches about the victory gained under the leadership of the Supreme Commander-in-Chief and the courage shown by the Azerbaijani heroic sons in the 44-day Patriotic War. It was noted that during the battles, the Azerbaijan Army demonstrated its strength and military power to the whole world. The Patriotic War restored justice, putting an end to almost thirty years of longing of our people.

The families of the Shehids expressed gratitude to the President of the Republic of Azerbaijan, Mr. Ilham Aliyev and the leadership of the Ministry of Defense for the attention and care.

Then the memorial complex dedicated to the military unit’s servicemen, who became Shehids, was opened.
At the event, the Mehteran Union of the Ministry of National Defense of the Republic of Turkey, which is on a visit to Azerbaijan, performed music praising the Turkish-Azerbaijani brotherhood and patriotism.