Statement signed under pressure from the ‘Iron Fist’ – OPINION 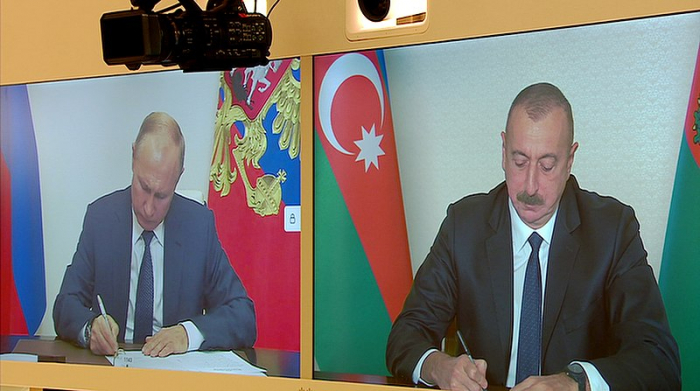 Today, November 10, marks one year since the signing of a Trilateral Statement that formalized Azerbaijan’s Historic Victory in the Second Karabakh War.

In his address to the nation on November 10, 2020, Azerbaijani President Ilham Aliyev stated that the Armenian leadership had no choice but to sign this document, otherwise no resistance and external pressure could prevent the Azerbaijani Army from stopping hostilities.

What were the realities behind this assurance?

1. As part of the strategic policy pursued under the leadership of President Ilham Aliyev to build a more powerful army, the country’s Armed Forces have been modernized, equipped with the most up-to-date weapons and had the level of professionalism of its personnel improved.  Thanks to all this, the Azerbaijani Army, one of the world’s 50 most powerful armies, managed to break through Armenia’s multi-layered defensive line in the occupied territories of Azerbaijan, forcing enemy forces to retreat and flee from strategic heights and positions.

2. From the beginning of hostilities through November 9, the Azerbaijani Army has liberated about 300 villages, 5 cities, 4 settlements, and a number of strategic heights. Yerevan, trying to cover up its military casualties, put the number of losses at around 1,500. However, independent experts estimated the number of Armenia’s military losses at 7,000-8,000. The bodies of servicemen found and handed to Armenia over the past year confirm the independent experts’ estimates. Undoubtedly, numerous casualties further weakened Armenia’s already small resources, including its economic potential, dragging the country into a military-economic abyss. All this made Armenia, as a state, face the danger of complete failure in the war against military-politically strong Azerbaijan.

3. The liberation of Shusha city, known as the pearl of Azerbaijan, after a unique military operation by the Azerbaijani Army on November 8, as well as the liberation of over 70 villages, 8 strategic heights a day later, has suppressed Armenia’s attempts to create an image of “alleged resistance”. The liberation of Shusha, which was historically considered an impregnable fortress and which the Armenian leadership was preparing to declare the “capital” of its separatist regime in Karabakh, shocked and disappointed not only the Armenian population but also Armenians all over the world and their supporters. Thus, capitulation was the only way out for the enemy.

4. The heavy defeat on the battlefield, heavy military losses and economic crisis were triggering dissatisfaction in Armenian society. The military and political incompetence of the Armenian leadership ultimately forced Yerevan to accept Baku’s demands for the cessation of hostilities.

5. Baku's well-thought-of foreign policy has made it possible for both regional and international political conjuncture to be at least loyal to Azerbaijan’s just cause and Patriotic War.

1. The abovementioned realities left no room for doubt that the Azerbaijani Army would go to the end and destroy the enemy. However, unlike the Armenian leadership which does not value the lives of its citizens and soldiers, the Azerbaijani government considers the death and injury of each of our compatriots and servicemen a great tragedy. President Ilham Aliyev has repeatedly stated that the death of about 3,000 servicemen in the Patriotic War is a great tragedy. The Statement of November 10, 2020, which envisaged the withdrawal of Armenians from Aghdam, Kalbajar and Lachin districts within the deadline, played a major role in preventing greater losses. This document was especially important in terms of the non-combat liberation of mountainous Kalbajar and Lachin districts with extremely cold winter. This document is especially important in terms of the non-combat liberation of Kalbajar and Lachin, mountainous regions where winters are very harsh. However, to liberate Aghdam, where a large number of Armenian troops were deployed and fortifications were built, could only be achieved at the cost of heavy bloodshed. In this sense, the Azerbaijani government, which signed the Trilateral Statement on November 10, 2020, prevented greater losses among our servicemen by achieving the liberation of Aghdam, Kalbajar, and Lachin districts without battles.

2. Many people raised the issue that the enemy would also suffer losses in case of a failure to sign the document. However, according to the theory of military operations, the attacking side inflicts more losses than the defending one, especially when conducting offensive operations in mountainous conditions. By signing the statement, Azerbaijan, which had stressed the importance of a peaceful solution to the problem for many years, has opposed bloodshed on both sides.

3. President Ilham Aliyev repeatedly stated during the war that Azerbaijan was ready to immediately cease military operations if the Armenian government undertook to unconditionally withdrawal from the Azerbaijani territories within a certain timetable. However, the Trilateral Statement forced Armenia to undertake this obligation and fulfill it. Thus, Azerbaijan proved that it has no eyes on the territory of any country and was waging the Patriotic War to liberate its occupied territories. It also confirmed the success achieved and prevented the transformation of the regional and international political situation that supported Azerbaijan.

4. The Trilateral Statement formalized the new geopolitical reality that emerged in the South Caucasus due to Azerbaijan’s ‘Iron Fist’, Turkey’s political and moral support, and Russia’s loyal position based on international law. The establishment of lasting peace and stability in the region, the unblocking of all communications for the development of comprehensive economic, social and humanitarian cooperation, the restoration of Azerbaijan’s land connection with Nakhchivan, and gaining direct access to Turkey through the Zangazur corridor is one of the most provisions of the Statement.

5. Just as there are historic victories, there are also historic defeats. The Trilateral Statement of November 10, 2020, is a document that embodies both realities. This Statement has not only confirmed Azerbaijan’s historic Victory but also formalized the historic defeat of Armenia and its supporters.

Thus, the Trilateral Statement, which is a confirmation of Armenia’s capitulation, became a document that defines the course of future regional developments upon the terms set forth by Azerbaijan.