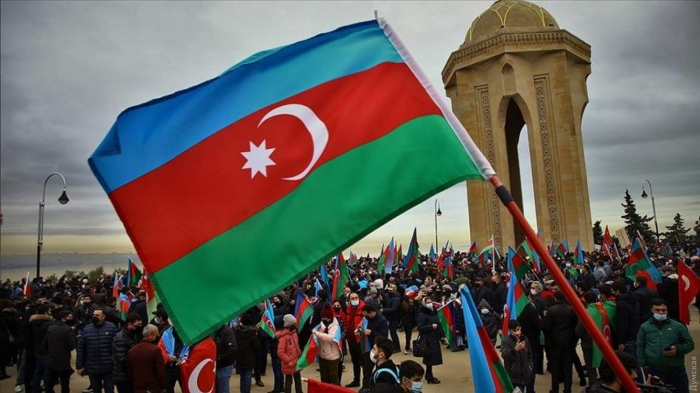 44 Days of Patriotic War ended with the splendid victory of Azerbaijan. During which Azerbaijan’s infinite voyage of martyrdom was confronted with maliciousness of Armenian which carried notorious past full of severer ethnic cleansing and horrible genocide, conspiratorial present and frightening future because of its paramount fascist hangover and state-sponsored terrorist activities and of course provocations.

During the war, Armenia intentionally surpassed the true essence of international law and perpetuated attacks on the civilian settlements and population of Azerbaijan. Azerbaijan started a counteroffensive operation during which it succeeded to destroy key military installations of Armenia and capturing tactical mountains and last but not least liberated illegally occupied areas from Armenia and its sponsored international militia and terrorist groups.

Armenia had has been trying to implement its “hegemonic designs” for “strategic expansion” for which it schemed to pursue its “cleansing” policies full of “genocides” towards innocent and helpless Azerbaijanis in the past.

Moreover, Armenia’ draconian instinct against the innocent local people living in various illegally occupied areas and adjacent to the border once again made it naked to use ferocious military power against stranded people. Fierce fighting was raged which had produced shock & awe in so many important capitals of the world especially the EU.

It had been adopted various interconnected social (forced settlement of Armenians from all over the world in disputed soil/lands) political (holding of illegal referendums and so-called democratic elections), economic (economic marginalization of local communities of Azerbaijan) and geo-strategic policies, and programs (formation of axis of evil & frequent military misadventures).

During the early days of the war, Armenia, troops fired on the villages of Agdam and Dondar Kuscu in Tovuz 120-millimeter mortars and D-30 howitzers which caused civilian causalities and considerable collateral damages. Azerbaijan’s Foreign Affairs Ministry rightly termed it inhuman and act of terrorism which showcased its aggressive and terrorist face once again.

Few Azerbaijani soldiers were martyred and three others were injured when Armenian forces violated a ceasefire and targeted positions of Azerbaijan's army in northwestern Tovuz district.  Azerbaijani army immediately launched counterattacks and succeeded to damage its various military installations and targets. According to Azerbaijan’s Defense Ministry the positions of the Armenian army, military radar station, vehicle depot, tanks and armored vehicles were hit and completely destroyed. More than 20 personnel from the Armenian army were killed in the attack, it added.

The United Nations Security Council adopted four resolutions 822, 853, 874 and 884 condemning the use of force against Azerbaijan and the occupation of its territories in 1993. It reaffirmed respect for the sovereignty and territorial integrity of Azerbaijan, reconfirmed that the Nagorno-Karabakh region is an integral part of Azerbaijan and demanded the immediate, full and unconditional withdrawal of the occupying forces from all the occupied territories.

Right from the beginning, the governments of Azerbaijan took principle stances that Karabakh is integral part of it. Khojaly genocide was the byproduct/strategic extension of Armenia’s aggression, brutality and state sponsored terrorism against innocent and helpless people of Azerbaijan. On February 26, 1992, Armenia committed a war crime, killing more than 613 peaceful residents of Khojaly, among them 106 women and 63 children

Victory of Azerbaijan in the 2nd war of Karabakh has now changed the nature, utility, scope and prospects of “power dynamics” in the SCR. The emerging security equation of the SCR has further consolidated bilateral relations among Azerbaijan, Pakistan and Turkey.

It has now proven that Azerbaijan was militarily better prepared, and had tactical and professional superiority through using of innovative and advanced technologies of warfare, effective and ideal combination of human as well as artificial intelligence mechanism  and last but not least, “visionary leadership” of Ilham Aliyev ultimately achieved a “miracle” in the second war for the liberation of illegally occupied areas of Nagorno-Karabakh from fascist Armenia.

The most important battle of the Nagorno-Karabakh War fought in the city of Shusha. Once Shusha captured, Armenia surrendered and entered a lopsided agreement, ceding massive amounts of their previously held territories.

In the past, Shusha was illegally and forcefully occupied by Armenia in 1992 which had majority of Azerbaijan population i.e. twenty-three thousand Azerbaijanis and just over sixteen hundred Armenians. Unfortunately, during and after the battle, most of the city was destroyed and much of the Azerbaijani population was killed, was expelled, or fled. At the start of the 2020 war, it had around five thousand people almost all ethnic Armenians.

Shusha is situated high above other towns and cities in the region. Its views and mountainous terrain give it a strategic advantage with which the entire occupied region can be kept under control. The city is also a formidable natural fortress.

It strategic location provided an ideal defensive buffer zone for Stepanakert not only the largest city in the region but also the capital of the Armenia-backed and the self-proclaimed Republic of Artsakh and a critical defensive node along the Lachin corridor, a mountain pass and road that provides a link from Armenia to Nagorno-Karabakh.

Critical analysis revealed that by mid-October 2020 Azerbaijani armed forces succeed to capture a key Armenian-controlled town, Hadrut as they moved toward the Lachin corridor connecting Armenia with Nagorno-Karabakh.

Afterwards, the Azerbaijani forces started the Lachin offensive had reached close to within six miles of the town of Lachin and the vital corridor by October 22. In retaliation, Armenian forces launched a counterassault in the heavily wooded mountain areas and set ambushes along main supply routes which were initiated to divert pressure away from the Lachin corridor.

During October 28-30 Azerbaijan special operations forces schemed a strategic formation and moved towards Shusha. They deployed their forces to isolate Shusha and disrupt the city’s defense. According to some reports (January 2021), four hundred soldiers of Azerbaijan marched for five days through the forests and ravines and avoided the heavily guarded Lachin corridor and surrounding villages. They divided into groups of one hundred reportedly so that they could approach the city from multiple directions and toward different objectives. They made history and their superior professional skills, tactical preparedness and self-belief achieved a miracle. It was achieved because of firm belief in true nationalism having provision of national dignity and self-determination.

Many of the soldiers of Azerbaijan special force climbed without the backup of fire thus the steep rocks and cliffs were left unguarded by the defending Armenians who seemed to believe the Azerbaijani forces would mainly attack up the main roads.

The cover of darkness, ongoing Lachin offensive and failed imagination of the defenders appeared to enable the Azerbaijani special operations forces to make their decisive move to covertly pierce the Shusha defense through seemingly unpassable forests and mountainous terrain.

Late on November 4, Azerbaijani forces had also secured the mountain range south of Shusha and key portions of the Lachin corridor connecting Shusha to the town of Lachin. They also increased the shelling of the Armenian defensive positions surrounding the city with mortars.

On November 5, the Azerbaijani special operations forces had reached the main road and were able to block reinforcements attempting to aid Shusha’s defense. The Armenian authorities, recognizing the loss of control over the area, closed the Lachin corridor to civilian traffic.

On November 6, they reached the outskirts of the town. They captured Argishit Kyarmyan and succeeded to penetrate Shusha. Other soldiers also successfully captured Dashalti, the village just south of Shusha, providing immediate access to the main road into Shusha.

They formed a defensive line in the Shusha forests and after repulsing three Armenian counterattacks returned on the offensive, capturing the building of Shusha Executive Power and beginning to drive out Armenian forces, deliberately clearing buildings and larger areas in the city. The battle for Shusha ultimately came down to building-to-building close combat.

On November 9, Azerbaijani President Ilham Aliyev declared total victory and control over Shusha, a move that was initially refuted by Armenia. But on November 10, Armenian Prime Minister Nikol Pashinyan signed a lopsided peace deal that included surrendering all areas of Nagorno-Karabakh that had been taken by Azerbaijan during the conflict to include Shusha.

The victory of Azerbaijan opened a new window of opportunities in the SCR. Energy and food security has been further amplified and strengthened. Azerbaijan has now become an important player in the “economics of gas” (demand & supply) in the Black Sea Region (BSR), SCR, EU and beyond.

The victory of Azerbaijan proved a good omen for the further strengthening of trilateral strategic dialogue/partnership of Pakistan, Azerbaijan and Turkey which would hopefully change the basic dynamics, directions and development concepts of the region in the days to come.

Afterwards, a series of bilateral and trilateral military drills among Azerbaijan, Pakistan and Turkey have been conducted which signalled the emergence of new defense partnerships in the region. It has actually further strengthened bilateral and trilateral defense cooperation in terms of joint exercise, production, technical education and tactical preparedness.

While visiting newly liberated areas, the international community and reputed NGOs witnessed “deadly demonstration” of Armenia who damaged the basic infrastructure of roads, homes, schools, nurseries, hospitals, social welfare centers, libraries, community centers and last but not least, nature. It has been indeed horrifying acts of sabotages, deliberate demolitions, massive destructions, and devastating anti-environmental activities and perpetual madness of “ethnic cleansings” even “genocide” did not spare “graveyards” and departed souls which have been inhumanely outrooted during all these years of siege and illegal occupation.

On its part, the government of Azerbaijan established a “development fund” for the massive reconstruction of these newly liberated areas. A regulatory body was also established for its easy, smooth functioning and speedy development. President Ilham Aliyev instructed the authorities to institutionalize the concepts of “smarter living” and “smart cities” with green-energies in all the newly liberated areas i.e. Fuzuli, Jabrayil, Zangilan, Qubadli, and Shusha which will definitely revolutionize human settlements, shelters and infrastructure development. Most recently, Fuzuli international airport has been inaugurated.

44 Days of Patriotic War was victory of Azerbaijan commitment over Armenia conspiracy, honesty over horrendous crimes, determination over destruction, bravery over brutality, dignity over degradation, vision over vicious circles of crimes, and the last but not the least, martyrdom over maliciousness. To conclude, Karabakh is Azerbaijan and caravans of martyrdom will not be defeated by the fleeing Armenians.  Azerbaijan is a land of brave hearts where beasts of Armenia has no place to settle.

Dr. Mehmood Ul Hassan Khan, Member Board of Experts of the Center for Global and Strategic Studies (CGSS) of Pakistan and regional geopolitical analyst.