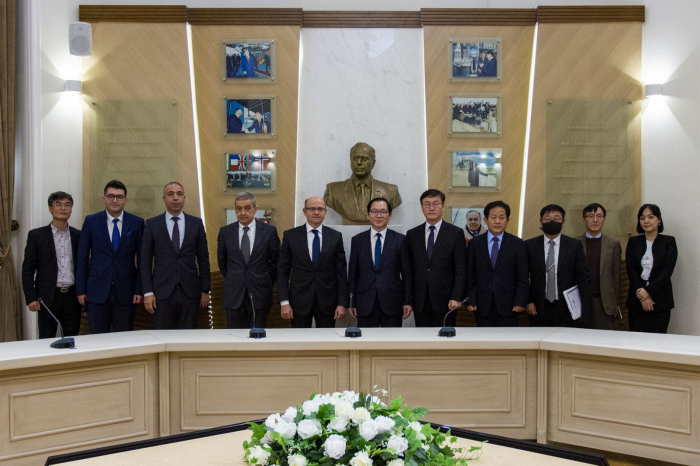 One of the main goals of Azerbaijan is to increase the capacity of renewable energy sources in the country from 17 percent to 30 percent by 2030, Energy Minister Parviz Shahbazov said, AzVision.az reports on Nov. 23 referring to the ministry.

Shahbazov made the remark at a meeting with the South Korean delegation led by Chong Soo Park, chairman of the Northern Economic Cooperation Committee under the President of the Republic of Korea, in Baku.

Speaking about the current level of economic trade relations, as well as cooperation between the two countries in the energy field, he noted that the delegation's visit will contribute to the realization of potential opportunities in the energy sector.

The minister informed about the development of the oil and gas industry in Azerbaijan, regional and global infrastructural projects in the field, as well as supply of petrochemicals and liquefied natural gas to South Korea.

He also emphasized special attention paid in Azerbaijan to the development of renewable energy.

As one of the national priorities for socio-economic development, important strategic tasks have been identified to become a country of “green growth” and achieve a clean environment, as well as to create a “green energy zone” in Azerbaijani territories liberated from Armenian occupation [in the 2020 Second Karabakh War], Shahbazov further said.

The minister added that the steps taken in this direction will provide high support to targets for renewable energy.

Besides, he stressed that the liberated areas will become a unique zone in the world with maximum use of renewable energy sources to meet energy needs.

At the meeting, information was also given about the high potential of wind energy in the Caspian Sea, prospects for the production and export of green hydrogen through this potential, and the cooperation opportunities in the relevant direction were noted. The work done to strengthen the legislative framework in the field of energy was also presented.

Park informed about South Korea's new Northern Policy and noted that although Azerbaijan is geographically the furthest among the 14 countries covered by the policy, the two countries have close relations.

He also spoke about his country’s energy policy and the work done in the direction of using renewable energy sources and protecting the environment.

Noting that there are well-known companies operating in South Korea in the field of “green energy”, including hydrogen energy, the chairman said that Azerbaijan's goals in this direction create the potential for cooperation with the Korean companies.

During the meeting, the importance of the event for the companies operating in the field of “green energy” on the relevant investment opportunities in Azerbaijan was noted.

The sides exchanged views on prospects for cooperation in various fields in the energy sector.