Does sibling rivalry ever end? 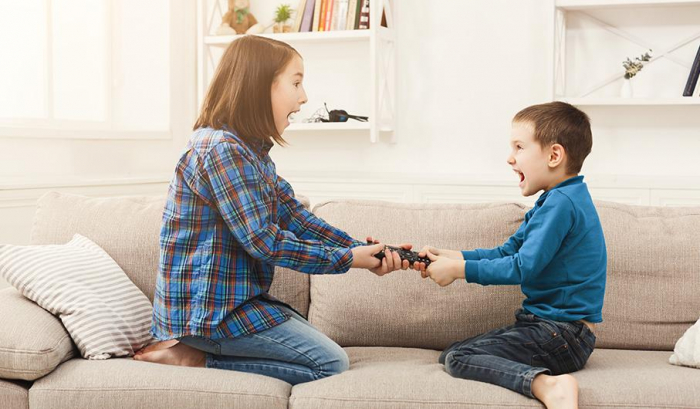 Most siblings fight and compete among each other as children. But for some, the conflict never ends.

When Roseanne was young, she says there was a lot of conflict between her and her twin brothers, who are nearly three years younger.

“They were very much a pair, their own team, so it was always two against one,” says Roseanne, a 46-year-old mum who lives in New Jersey, US. Some of that conflict endures, she says, even now, and it can occasionally feel like nothing has changed since childhood. “We were very, very different. We just seemed like we were in different worlds, and I think that’s part of the problem with my two [children] now.”

Roseanne has a 16-year-old son and a 14-year-old daughter who haven’t got along since they were in nursery school. “The bickering is exhausting,” she says. “For a long time, we’ve avoided doing much together as a family because we just don’t want to hear it. We can’t sit at the dinner table for 10 minutes without shots being flung. They’re each constantly worried about the other person, making comments, pushing each other’s buttons.”

Siblings fight. Of course they do; as almost anyone who has a sibling knows, some kind of rivalry is common.

“Children have much less ability than adults do to reflect on what’s upsetting them or keep their impulses at bay. So, they fight a lot, as we all know,” says Dr Raymond Raad, co-founder of RIVIA Mind, a mental-health centre in New York City.

In many families, bickering among siblings is formative. It helps children learn to handle conflict and makes them better at interacting with others. For some, the rivalry lessens in adulthood, and becomes just something to laugh about at family parties.

But for others, it sticks around. A survey of 2,000 adults in the UK, completed as a promotional effort for the television show Succession (in which siblings are constantly trying to outdo each other), showed more than half of respondents still feel they’re in competition with their siblings. Fifty-one percent of these adults report a lasting, competitive relationship with their siblings, and said they compete over everything from home ownership to who gets to host family get-togethers. Some experts agree these conflicts indeed drag on.

Sibling rivalry may not seem surprising in childhood years. But many – like Roseanne – still feel the conflict, far after they’ve moved out of the same home as their siblings. Why does this competition stick – and can we ever get over it?

“As human beings, we’re oriented towards comparison,” explains Shawn D Whitehead, a professor of human development and family studies at Utah State University, US. “Siblings provide a natural point of comparison. They’re in your home, growing up with you, generally within a few years of your age on average. They’re in the same environment and the same house, so they provide us a good comparative measure.”

For instance, it’s easy for siblings to compare their academic or athletic success, or jostle over who is the ‘favourite’ child, since siblings often have similar experiences (like attending the same schools). And the closer in age kids are, the more intense the rivalry can be.

This natural inclination to compare ourselves to other people can be a major driver of sibling competition – especially, says Raad, because our siblings tend to be the people we spend the most time with during childhood, and subsequently know the most about.

It may seem ‘natural’ for siblings in the same environments performing the same hobbies to butt heads. Yet, siblings who aren’t competing at the same activities still find ways to compete, too.

Whitehead says some siblings try to differentiate themselves in an effort to reduce competition – especially if they’re close in age to their siblings. “That would, in theory, reduce rivalry,” says Whitehead, “but the research is mixed.”

That chimes with Roseanne’s experience: both with her own brothers and her kids, she says being different is a major driver of conflict.

Roseanne’s daughter is talented athletically, while her son is naturally gifted academically. Roseanne says since her daughter must work much harder to maintain good grades, their differences have become a constant point of contention between the siblings. “Many, many teachers and even some family members have always commented on how smart my son is,” says Roseanne. “I know it’s a pressure point for my daughter.”

It’s also common for competitiveness to intensify in the teen years, says Raad, as “parents or school or sports environments create an expectation that everything’s a competition”.

But even as siblings develop more individualised identities later in life, differences can continue to drive competition and conflict – especially with brothers and sisters who were raised in the same household, yet ended up very different from one another. Even as their paths diverge, says Raad, “that doesn’t mean they won’t fight about things later in life”.

Another major driver of sibling rivalry is fairness, an idea that, Whitehead says, is deeply important to children.

“Parents are more likely to grant privileges to younger children sooner than they did the older kids,” he says. “As a parent, when you say to a 12-year-old, ‘you can stay up until 10’, then maybe the 10-year-old gets to do it too, because [parents] don’t want to fight.” When younger children get permission earlier than an older sibling did, “that can cause the older one to feel things are unfair. That creates conflict”, adds Whitehead.

And it turns out siblings don’t necessarily ‘grow out’ of the desire for fairness – instead, it’s still one of the factors that can drive sibling rivalry into adulthood, says Raad.

“When you look at people who have conflict, there seems to be an implicit thought that we come from the same place, the same family, so it’s only fair we’re similar and on-par,” he says. “The issues arise when there’s a feeling from one of the siblings that something’s unfair in their lives. There’s a perception that one of them is prettier, smarter, more successful – and it gives the other this feeling that the gene pool has been distributed unevenly.”

In adulthood, the fairness question among siblings applies to things like professional success, how happy people are in their marriages and more, adds Raad. “Unlike with friends, where you can say, ‘oh, we’re so different, we come from such different places’, there’s this idea that siblings come from the same background, so something should be fair about where they end up.”

Some rivalry among adult siblings isn’t necessarily all bad, however. More than a quarter of respondents to the OnePoll survey say they compete with their brothers and sisters over career goals, and for 15% of respondents, rivalry has motivated them in their careers. For nearly two in 10 of the adults, there’s a strong belief sibling rivalry has led them to achieve more in their lives. So, some minor rivalry may be healthy – and just natural.

It isn’t a given that every group of siblings will compete for the rest of their lives, however. For many, the fighting fades as they become adults. The experts agree there’s no one reason sibling rivalry disappears in some families and persists in others. “The best predictor for your adult relationship is your childhood one, but there’s also room for change,” says Whitehead. A rivalry’s intensity can fade with space and distance, he says, so siblings who end up living far apart geographically, or who don’t see one another as often, may naturally butt heads less.

The best predictor for your adult relationship is your childhood one, but there’s also room for change – Shawn D Whitehead
The number of big shifts a family experiences can affect rivalries, too, he adds. “We see change around big events. Somebody gets married, has a child, loses a parent. Those can all help re-orient relationships.” When sibling groups have those big moments to bring them together, it can help mend fences.

But ultimately, Whitehead says, the determining factor for which families get over it – and which families don’t – is down to personality. “The sibling relationship is unique and multifaceted,” he says, “and there are often just as many differences within families as there are between them.”

Experts suggest parents can help young children reduce natural rivalry and insulate them against more serious later-in-life clashing, however. “Parents should be modelling problem-solving and social skills,” says Raad. ”You can have conflict in your house – that’s only healthy – but being able to model how you address that conflict without it escalating will help your kids later on.”

Encouraging siblings to form close relationships into adulthood – even if that means the occasional argument – can make a significant difference. “Those relationships truly last a lifetime,” says Whitehead. “Late in life, our siblings become even more important to us. When our parents are gone, they’re the last connection we have to our family of origin. Ultimately, siblings are left with each other.”

“There was a lot of tension between me and my brothers in our house growing up,” says Roseanne. “But now, we’re together at family functions, we text and chat about my mom, that kind of stuff, and I’ve gotten close with at least one of my brothers – even though it took until much later in life.”