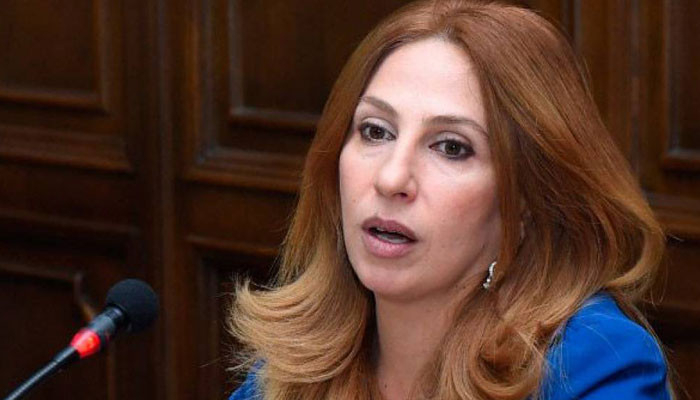 Zaruhi Postanjyan, a former Armenian MP and chairman of the Apricot Country party made an insulting remark saying that "The Turks smell, and the houses they live in smell bad", Azerbaijani MP Sahib Aliyev told AzVision.az.

"Indeed, Zaruhi Postanjyan's opinion smells very bad. It is the smell of Nazism. Besides, we are not surprised by this kind of statement of a member of parliament from a country conducting ethnic cleansing against Azerbaijanis. This proves once again that in Armenia, at least in its so-called "political elite", there is a total infection with Nazism, racism and xenophobia", MP Aliyev noted.

Aliyev also stated that Postanjyan's words were in fact a different repetition of what former Armenian President Robert Kocharian said in January 2003 about the ethnic discrepancy between Azerbaijanis and Armenians. Aliyev also highlighted Hitler and others made similar statements about the Jews adding that people like Postanjyan and Kocharian should take lessons from the end of Hitler and other fascists.

"Well-known international organizations, which like to talk about human rights, should not ignore such statements of the Armenian representatives. Vaccination is also a way to prevent the spread of this disease -Nazism in the Armenian political elite. The harsh, principled criticism expected from these organizations can replace the effect of the vaccination in this case," he added.