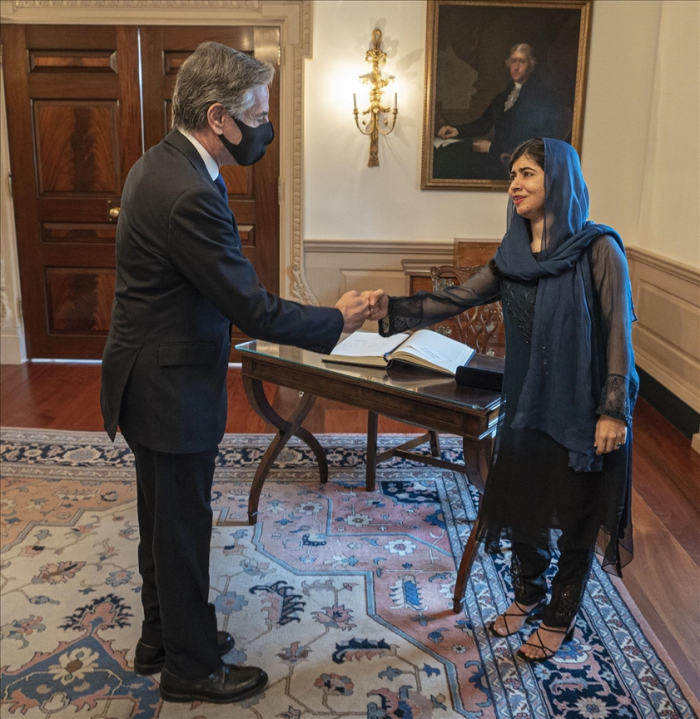 Malala Yousafzai, famously shot by the Taliban for going to school in 2012, decried on Monday the turnabout happening now under Taliban rule in Afghanistan, where freedoms of women and education opportunities have disappeared.

Facing the media, and meeting with US Secretary of State Antony Blinken in Washington D.C., the poised and newly married Yousafzai told Blinken: "You've mentioned that we're here to talk about equality in girls' education, but we know that Afghanistan right now is the only country where girls do not have access to secondary education."

It has been nearly 100 days since the US pulled out of Afghanistan after a 20-year military and diplomatic presence, a presence that saw women and girls make tremendous educational and professional strides. But the returning Taliban have taken the country back to a male-dominated society, with few educational options for girls and women.

"Girls' education is a powerful tool for bringing peace and security," Yousafzai said, quoting from a 15-year-old Afghan girl's letter to her. "If girls don't learn, Afghanistan will suffer, too. As a girl and a human being, I need you to know that I have rights. Women and girls have rights. Afghans have the right to live in peace, go to school and play."

"This is the message of Afghan girls," Yousafzai told Blinken. "We hope that the US, together with the UN will take immediate actions to ensure that girls are allowed to go back to the schools as soon as possible, women are able to go back to work and all the humanitarian assistance that is needed for education there is provided."

Blinken praised Yousafzai, calling her an inspiration to girls and women and around the world, and promised that he would share the Afghan girl's letter with President Biden.

Blinken announced in October that the US was providing $144 million dollars in aid to Afghanistan, but most of that will go towards humanitarian needs. Blinken said the money would benefit the "people of Afghanistan", not the Taliban, but it does not appear the US can force any changes to Taliban rule that would see girls and women go back to getting educations.

Yousafzai was shot in her home country of Pakistan, then went on to become the youngest-ever winner of the Nobel Peace Prize in 2014. She now resides in England.