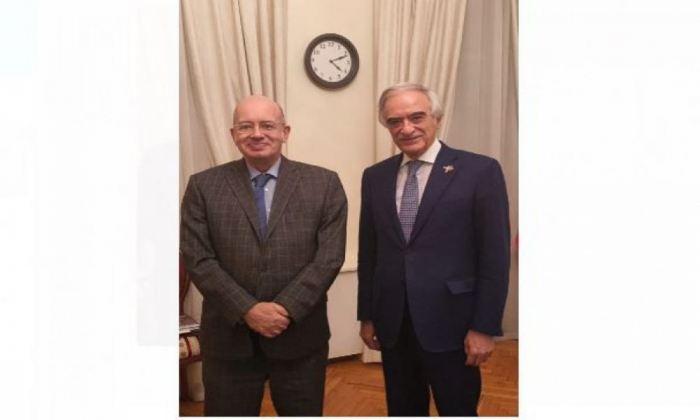 The parties exchanged views on the implementation of the provisions of the trilateral statements of the leaders of Azerbaijan, Russia and Armenia dated November 10, 2020, and January 11, 2021. At the same time, they discussed the results of the trilateral summit meeting held in Sochi on November 26, 2021.

Levy inquired about Azerbaijan's position on the post-conflict period, especially the situation after the Sochi meeting.

Bulbuloghlu said that Azerbaijan, as noted by President Ilham Aliyev, is ready for the peace process. In this context, the diplomat emphasized that, although Azerbaijan has taken practical steps to implement the provisions of these statements, Armenia hasn’t yet fulfilled these obligations.

Stressing the need for Armenia to reconcile with the current realities and the importance of the soonest restoration of economic and transport ties in the region, the ambassador noted the meetings of the Working Group at the level of deputy prime ministers of the three countries.

In this regard, he expressed confidence that the opening of transport communications in the region, including the Zangazur corridor, in the shortest possible time will create new opportunities for the countries located here, as well as contribute to cooperation and peace.

Speaking about the meeting of the leaders of Azerbaijan, Russia and Armenia in Sochi, Bulbuloghlu said that this meeting is very important for the normalization of relations between Baku and Yerevan, and namely the direct contacts of the leaders can give positive results.

Then the French ambassador asked to inform him about details of the border delimitation process between Azerbaijan and Armenia.

Noting that appropriate contacts were made on the delimitation of the state border between the two countries, the Azerbaijani diplomat emphasized the need for an early establishment of a bilateral commission, adding that the beginning of this process will be an important step towards peace and stability in the South Caucasus, and that the Azerbaijani side is ready for this responsible work.

At the same time, Bulbuloglu spoke in detail about the ongoing large-scale restoration work in the territories liberated from the Armenian occupation, informing Levy that the international airport in Fuzuli city was built within just eight months, and that the Victory Road [from Fuzuli to Shusha] meeting new modern standards was commissioned in a short time.

At the end of the meeting, the Azerbaijani ambassador presented "Chronicle of Victory" and "Before and after the occupation of Karabakh" books published by the Heydar Aliyev Foundation to his counterpart.

The French ambassador thanked Bulbuloghlu for the interesting and useful meeting.