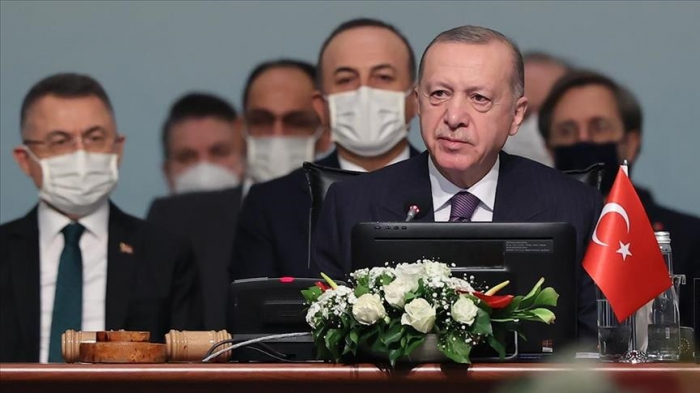 It is a "great injustice" that the African continent, with its population of 1.3 billion, is not represented at the UN Security Council, Turkey's president said on Saturday.

Referring to his slogan, "the world is bigger than five," protesting the unrepresentative setup of the UN Security Council, Recep Tayyip Erdogan said Turkey's efforts were also meant for its brothers and sisters in Africa, as well, in his speech at the third Turkey-Africa Partnership Summit in the Turkish metropolis Istanbul.

Over 100 government ministers and 16 presidents from Africa are attending the summit which is being held under the theme, Enhanced Partnership for Common Development and Prosperity.

"I believe that we need to join forces so that Africa can be represented in the Security Council, as it deserves," he added.

Underlining that it was disgrace for humanity that only 6% of Africa's population has been vaccinated against COVID-19, Erdogan noted: "Turkey plans to send 15 million vaccine doses to Africa."

When Turkey's domestic vaccine candidate, which it named Turkovac, receives emergency use authorization, Ankara will put it to the service of all humanity, including Africa, he highlighted.

He added that Turkish hospitals across in Somalia, Sudan, and Niger were healing people across the continent.