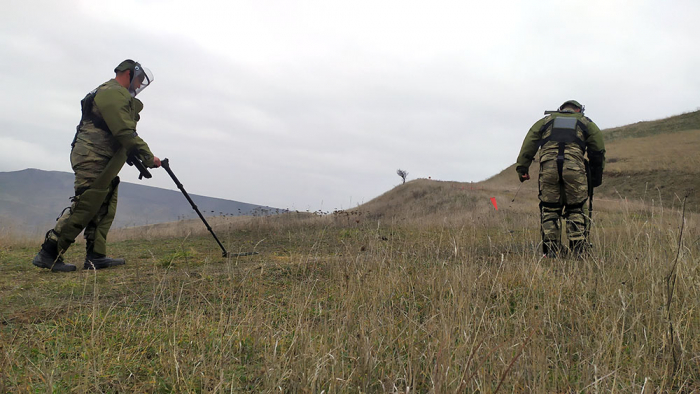 Azerbaijan Army’s engineer-sapper units together with Turkish military sappers continue to carry out the work on clearance of mines and unexploded ordnance in the liberated territories, the Azerbaijani Defense Ministry told AzVision.az.

In order to ensure the safe movement of vehicles, roads are being cleared of mines and snow cover, and new supply roads are being laid in the direction of the positions of the Azerbaijan Army Units deployed in the mountainous terrain.

As a result of the activities of engineering and sapper units in the liberated territories from December 10 to December 19, 53 anti-personnel and anti-tank mines were detected and neutralized, 92 hectares of territory were cleared.

To date, the Engineering Troops have summarily detected and neutralized 17255 mines and unexploded ordnance in the liberated territories, cleared of mines 13365 hectares of territory, as well as laid 635 kilometers of roads in cooperation with other state structures.

MEMATT (Mechanical Mine-Clearing Equipment), which was manufactured by the company ASFAT under the Turkish Ministry of National Defense and transferred into the armament of Azerbaijan Army’s engineer-sapper units, is also involved in the work on clearance of our settlements and sowing plots from mines and unexploded ordnance.

Engineering support activities are being continued in the liberated territories.