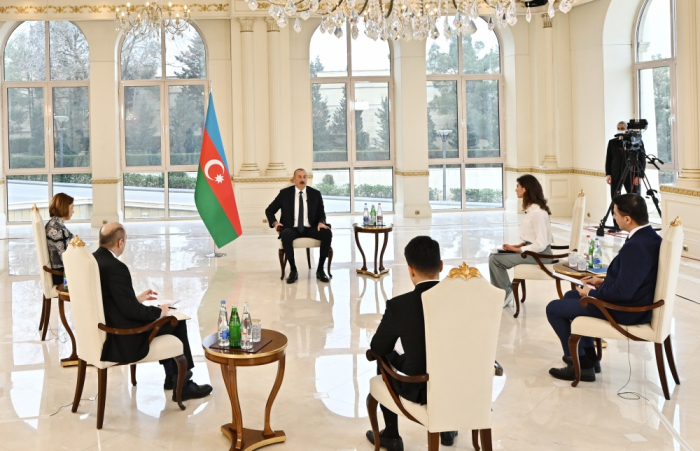 On January 12, President Ilham Aliyev, in a press conference with the representatives of the local TV channels, presented the main issues determining the domestic and foreign policy agenda of Azerbaijan in 2022. His interviews in this format have become in recent years an instrument for communicating important messages and presenting the priorities to a domestic and foreign audience.

Close observers of Azerbaijani foreign policy would remember his interview on July 6, 2020, a few months before the fateful war between Armenia and Azerbaijan. President Aliyev then, sharply criticizing the international mediators [the Minsk Group of the Organization for Security and Cooperation in Europe (OSCE] mandated to coordinate the peace negotiations between the two countries and Armenia’s destructive policies, and for the first time declared that the peace process had become “pointless”. This signaled that Baku would no longer accept the slow annexation of its occupied territories by Yerevan and as such would resort to force in case of new armed provocations of the Armenian side.  Subsequently, Azerbaijan had to militarily liberate the region in the Second Karabakh War that started on September 27 and lasted until November 10, 2020.

The latest interview was similarly of a programmatic nature and declared the priorities of the country for the new year. These priorities cover a wide-range of issues critical for Azerbaijan and its national security,  which can be grouped as follows:

First, Azerbaijan will continue to pursue a multilateral approach in foreign policy avoiding aligning with any major power at the cost of its partnership with others. As manifested by the stress President Aliyev put on the importance of the Non-Aligned Movement, Azerbaijan is not interested in joining any military bloc and seeks to maintain friendly relations with all the major global players. This is a very important message against the backdrop of present growing rivalries between Russia and the West over spheres of influence. Lamenting that international relations are increasingly becoming a battlefield between rival great powers who disregard international law and norms, he announced that Azerbaijan will be prepared against any threats to its sovereignty and national security.

On this basis, Azerbaijan will continue to cooperate with Russia in many areas of mutual interest. This includes, among others, the provision of security in the Karabakh region of Azerbaijan, with the assistance of Russia’s peacekeeping mission. However, although President Aliyev, in general, positively assessed the contribution of this mission, he referred to several negative incidents for example the illegal visits of foreign nationals to the territories, without prior notification to the Azerbaijani side.

As part of its multilateral agenda, Azerbaijan will also try to build on its partnership with the European Union. At the press conference, President Aliyev talked about the bilateral relations with the EU in a very positive tone and appreciated the current cooperation with the bloc in multiple areas and the EU’s contribution to the normalisation of the Armenia-Azerbaijan relations. At the same time, he noted that Azerbaijan expects the EU to be more balanced in its policies in the South Caucasus. “We were very surprised that a financial package of only 140 million euros was envisaged for Azerbaijan, which has experienced major destruction [in the formerly occupied Karabakh region], and 2.6 billion euros are envisaged for Armenia. This is an injustice”, he protested adding that, if implemented in this form, “it will have a huge negative impact on EU-Azerbaijan relations”.

Second, Azerbaijan is interested in the normalisation of relations with Armenia and the opening of regional transportation and communication channels. Azerbaijan will continue to seek a peace treaty with Armenia putting an end to the hostilities and overcoming the atmosphere of enmity in the bilateral relations. Azerbaijan, however, does not see any role of Minsk Group in this process, as Baku considers the conflict with Armenia as resolved and therefore the pre-war agenda of the Minsk Group is no longer acceptable to Azerbaijan.

But Azerbaijan will also continue to modernize its army to get prepared for any revanchist provocations. Referring to the recent attacks by the Armenian Armed Forces against the units of the Azerbaijani army along the state border which resulted in the death of an Azerbaijani serviceman, President Aliyev stated that there are still forces in Armenia who seek to undermine the peace process and undo the results of the latest war. Azerbaijan will resolutely counter any such attacks which necessitate the modernization of the military capabilities of the country. For this purpose, the government will spend around 4.5 billion manats (approximately $2.7 billion), nearly 15 percent of the state budget, on defense and national security in 2022.

Third, President Aliyev signaled that the 3+3 format which stands for the cooperation of Armenia, Azerbaijan and Georgia plus Russia, Iran, and Turkey will be one of the priorities of his agenda. Characterizing the first meeting in this format organized in December as introductory, he said he expects subsequent meetings to focus more on the real issues such as opening regional transportation routes. In this regard, President Aliyev considers the Zangazeur Corridor, which will connect mainland Azerbaijan with its Nakhchivan exclave through the southern territories of Armenia, as a core element of the larger plans for regional cooperation. Truly, this corridor will not only connect the two parts of Azerbaijan but will serve as a linkage for transportation amongst the other members of the 3+3 group as well.

Fourth, Azerbaijan will continue to play an active role in the international arena, including in the Non-Aligned Movement – a structure which Azerbaijan has been that has been chairing since 2019. Azerbaijan has played an active role in the global fight against the coronavirus pandemic since its beginning. Summoning an extraordinary summit of the Non-Aligned Movement in May 2020 and initiating discussions within the UN General Assembly, Azerbaijan took a pioneer position in this fight. On November 18, 2021, at the initiative of Azerbaijan, as the chairman of the Non-Aligned Movement, the UN General Assembly adopted a resolution to ensure universal access to COVID-19 vaccines. Prior to the adoption of this resolution, on September 24, in his speech at the UN General Assembly, Azerbaijani President Ilham Aliyev sharply criticized "vaccine nationalism" and expressed concern that underdeveloped countries still do not have access to enough vaccines. It should be noted that while calling on the world community to be more careful in this matter, Azerbaijan has also taken steps in this direction, providing $10 million to the World Health Organization in 2020 and making financial and humanitarian assistance to more than 30 pandemic-hit countries, and helping certain countries in the vaccine supply.

President Ilham Aliyev announced that the policies in this direction will be maintained in the upcoming year and the country will seek to raise the profile of the Non-Aligned Movement in the international arena. Saying that it is necessary for the Movement to start the process of institutionalization, he underscored that Azerbaijan has already taken certain steps in this direction. “The first is the forthcoming Baku meeting of the heads of parliaments that are members of the Movement. We want to create a parliamentary element. An agreement has already been reached. We also want to create a youth element of this Movement [as well] and thus go through structural changes”, the Azerbaijani President stated at the press conference.

What is more, seeking to continue to punch above its weight in international relations, President Aliyev’s Azerbaijan will seek to realize its ambitions in 2022 to become a “middle power”. Towards this end, Azerbaijan will try to avoid getting entangled in the rivalries of global powers, maintaining amicable ties with all the states interested in cooperation based on mutual respect to sovereignty and national interests. The resolution of the Armenia-Azerbaijan conflict, regional cooperation initiatives like the 3+3 platform, and the re-opening of transportation links in the region, will thus open new perspectives for Azerbaijan’s foreign policy in 2022.

Vasif Huseynov is a senior advisor at the Center of Analysis of International Relations (AIR Center) in Baku, Azerbaijan.