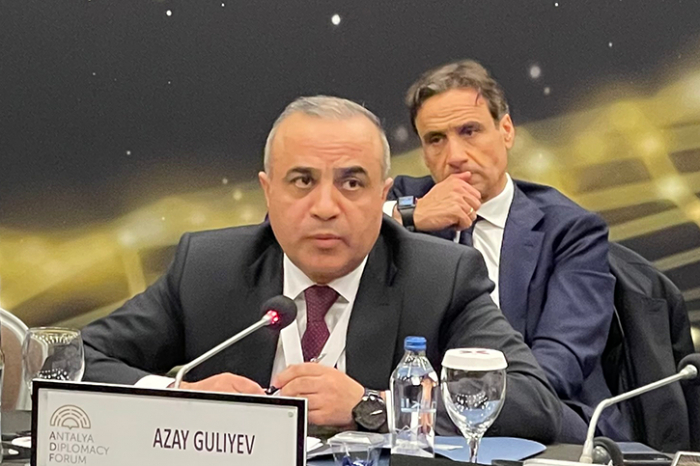 The high-level conference, hosted by the government of Turkey and the Turkish Ministry of Foreign Affairs, brought together politicians, diplomats, academics, journalists and civil society representatives discussing and exchanging views on current international affairs.

Speaking at a panel on parliamentary diplomacy, Vice-President Guliyev stressed that “creating and preserving conditions facilitating dialogue, even in the most dire of times, lies at the very core of the OSCE Parliamentary Assembly. Particularly in view of the ongoing crisis in Ukraine, the Assembly offers a platform Ukrainian and Russian parliamentarians can utilize to engage in dialogue.”

Commending the efforts of bringing together the Ministers of the Russian Federation and Ukraine on the sidelines of the Forum, Secretary General Montella stated: “This year’s Antalya Diplomacy Forum comes at a time when we are witnessing devastating human suffering in Ukraine. We owe it to the people of Ukraine, and people around the world caught in crossfires of conflicts, to never spare any effort to continue to search for means for dialogue, such as through the Antalya Diplomacy Forum, which is the only way forward.”

Held under the theme “Recoding Diplomacy,” the Antalya Diplomacy Forum included a series of panels, roundtables and bilateral meetings, with focus on reviving diplomatic efforts and tools to effectively respond to contemporary challenges.