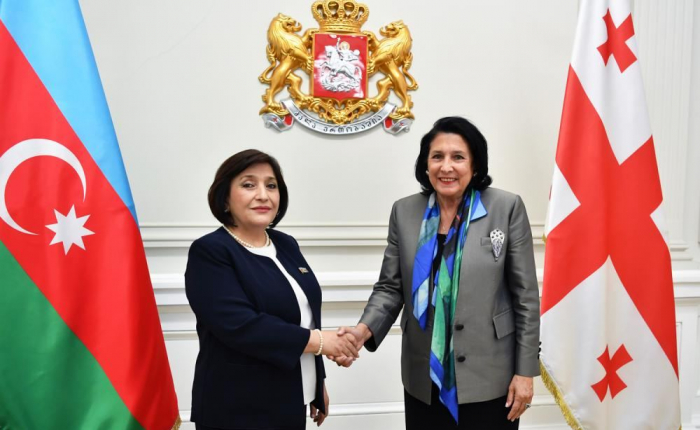 Speaker of Azerbaijan’s Milli Majlis (Parliament) Sahiba Gafarova had a meeting with President of Georgia Salome Zourabichvili as part of her official visit to that country on Tuesday, AzVision.az reports citing the parliament’s press service.

President Zourabichvili said she was glad to welcome Speaker Gafarova, noting then that such visits as this mattered for exchange of experience.

Mrs Zourabichvili underlined the role of the parliaments in the progress of the bipartite cooperation and said her thanks for the promotion of the close bilateral inter-parliamentary connexions. Georgia and Azerbaijan back each other in the international arena, Mrs Zourabichvili mentioned with satisfaction.

Speaker Gafarova voiced her gratitude for the cordial reception the Azerbaijani delegation had been given, to say then that Azerbaijan and Georgia, neighbors and amicable states, had the history of relations that date back over many centuries and that had been propelled to intensive progress when both states had regained their independence. And, incidentally, the thirtieth anniversary of the diplomatic relations between Azerbaijan and Georgia will be marked this year.

These kindly relations stemming from the foundation laid by the Great Leader Heydar Aliyev are maintained by President Ilham Aliyev successfully now. The two countries have signed documents encompassing various areas over the past years; those documents are the powerful legal platform for our collaboration in all those areas.

Continuing the conversation, Speaker Gafarova highlighted the work done by the Inter-Governmental Commission on Bilateral Economic Co-operation and mentioned Georgia being an active player in the colossal international projects that Azerbaijan had undertaken.

Turning to the subject of the relations between the Azerbaijani and Georgian legislatures then, the speaker emphasized the role the legislatures played in the progress of the Azerbaijani-Georgian connexions. Our parliaments interact one-to-one as well as multilaterally. Both have friendship groups, too. Our delegations co-operate fruitfully in the international parliamentary entities.

Azerbaijan had liberated its lands that Armenia had held occupied for almost thirty years, and had made its national territory whole again, Gafarova stated. Armenia had plundered our tangible heritage and destroyed our towns and villages in those provinces entirely in the period of occupation. Why, the Armenian-Azerbaijani conflict has been consigned to history already whereas Azerbaijan is now busy demining and repairing the liberated territories so that the internally displaced people could move back to their native parts. Azerbaijan has put proposals to Armenia about signing a peace treaty that would ensure sovereignty and territorial integrity recognition, gear into motion the border delimitation and demarcation process, lead to restoration of all the regional communications and result in normalization of the relations. We hope that a peace treaty being signed between the two states soon enough will come as a weighty contribution to the whole region’s development and flourishing, Gafarova remarked.

There was also an exchange of opinions on other topics of shared interest at the meeting.