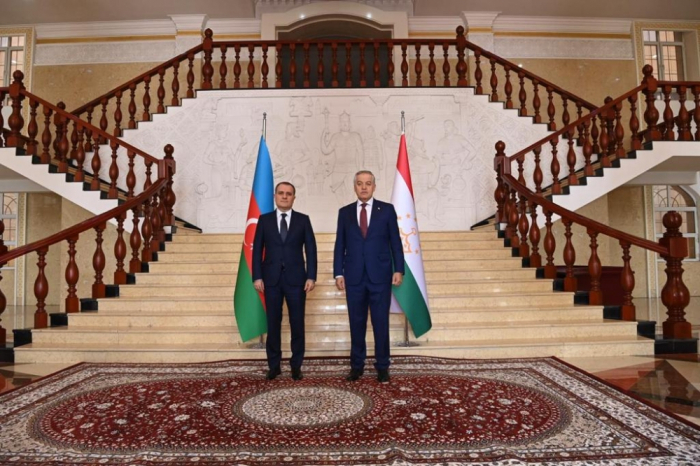 Azerbaijan's Minister of Foreign Affairs Jeyhun Bayramov has met with his Tajik counterpart Sirojiddin Muhriddin as part of his visit to Dushanbe to attend the meeting of the CIS Council of Foreign Ministers, the Azerbaijani Foreign Ministry told AzVision.az.

Foreign Minister Jeyhun Bayramov said that great importance is attached to the development of relations with Azerbaijan and steps are being taken to strengthen bilateral relations. Noting the important role of reciprocal visits in this regard, Minister Sirojiddin Muhriddin referred to the recent visit of the Speaker of the Upper House of the Supreme Assembly of Tajikistan to Azerbaijan.

FM Bayramov thanked his counterpart for the warm welcome and hospitality. Congratulating his Tajik counterpart on hosting the meeting of the CIS Council of Foreign Ministers at a high level, Jeyhun Bayramov said that this meeting provided favorable conditions for the discussion of many issues on the agenda by the member states.

Minister Bayramov noted that the political dialogue between the two countries is at a high level, and Azerbaijan values the development of bilateral relations with friendly Tajikistan.

The FMs exchanged views on the upcoming celebration of the 30th anniversary of the establishment of diplomatic relations between the two countries, the continuation of consultations between the Foreign Ministries of the two countries, as well as the prospects for developing relations in the trade and economic sphere, including the next meeting of the Joint Intergovernmental Commission on Trade and Economic Cooperation between the Republic of Azerbaijan and the Republic of Tajikistan, and on other issues.

At the meeting, the sides also discussed issues of mutually beneficial cooperation between the two countries within the framework of international organizations.