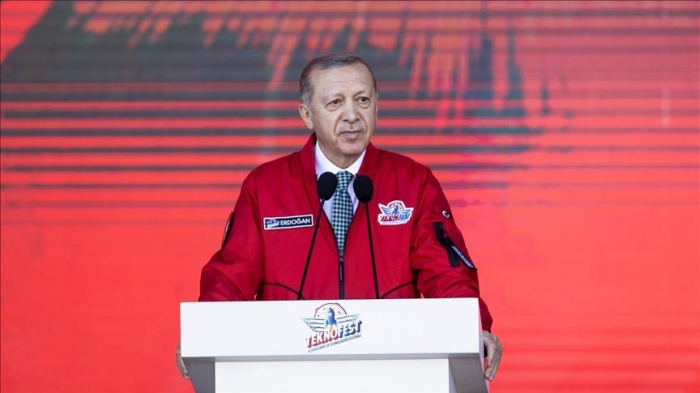 As Turkey and Azerbaijan enjoy strong, deep-rooted relations, the Turkish president on Saturday stressed the two countries' "strategic alliance" as cemented by last year’s declaration in the wake of Azerbaijan’s victory in a regional conflict with Armenia.

"We first elevated our relationship with Azerbaijan to a strategic partnership, and last year to a strategic alliance with the Shusha Declaration," President Recep Tayyip Erdogan said at leading Turkish aviation, space, and technology festival Teknofest, now held abroad for the first time, in the Azerbaijani capital Baku.

Saying that the two countries have taken bilateral ties to a level that is exemplary not only for the region but also for the entire world, Erdogan said: "We are organizing Teknofest, the world's most popular aviation, space and technology festival, in Baku, the pearl of the Caspian, with the slogan of one nation, two states, one festival."

Just like Turkish Anatolia, just like Turkey itself, Azerbaijan is also our homeland, the Turkish leader added.

"Just as we do not have designs on anyone's lands or sovereignty, we do not and will not have a single inch of land to lose to people with malicious intent," he declared.