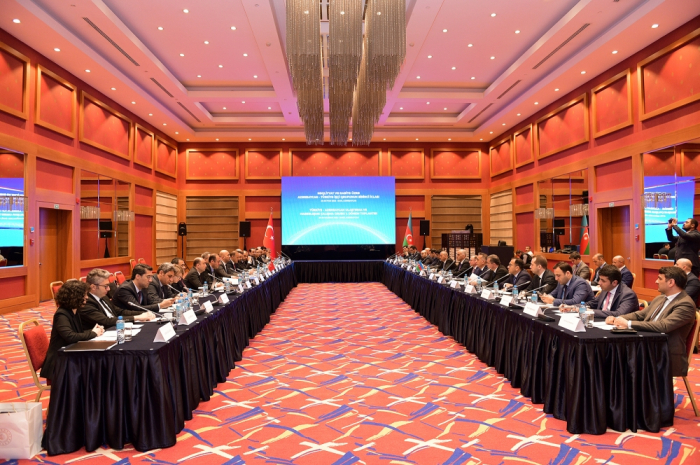 On June 29-30, the first meeting of the Azerbaijani–Turkish Working Group on Transport and Communications was held in Baku.

The meeting, co-chaired by Deputy Minister of Digital Development and Transport of the Republic of Azerbaijan Rahman Hummatov and Deputy Minister of Transport and Infrastructure of the Republic of Turkiye Omar Fatih Sayan, was attended by authorized persons from the fields of civil aviation, road and maritime transport, railways and communications.

Joint steps to attract additional cargo flows to the Baku–Tbilisi–Kars railway line and the Middle Corridor, to improve the efficiency of Ro-Ro transport on the Caspian Sea, and to implement more flexible regulation for transit cargo transportation and to facilitate transportation processes were discussed at the meeting.

The event highlighted the importance of the first tripartite meeting of the ministers of foreign affairs and transport of Azerbaijan, Turkey and Kazakhstan, held in Baku on May 27 this year, and the signing of the Baku Declaration.

It was noted at the meeting that the Zangazur corridor will contribute to peace, stability and cooperation in the region, and the importance of construction of the Kars–Nakhchivan railway line, which will be the continuation of the corridor, was also emphasized.

During the event, there was an extensive exchange of views on the development of fibre-optic infrastructure between the two countries, cooperation in the fields of new-generation 5G mobile communication technologies, cybersecurity, and smart transport systems. An agreement was reached to exchange experience and organize joint trainings in these areas.

At the end of the meeting, the minutes of the first meeting of the Azerbaijani–Turkish Working Group on Transport and Communications were signed.