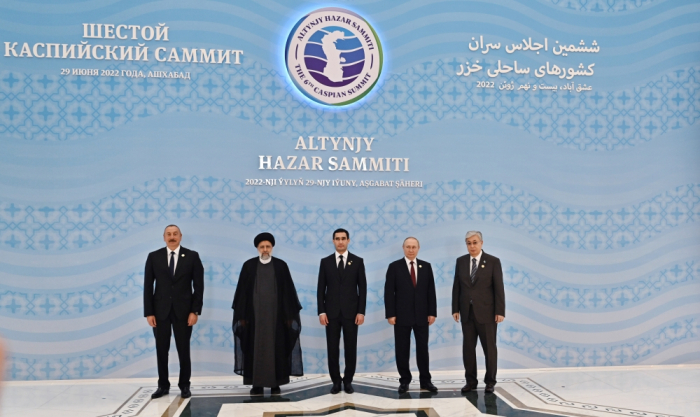 The vision of an economic cooperation corridor from Central Asia to Europe via the Caspian Sea is not new.  The Caspian littoral states have a vast network of oil and natural gas pipelines from the Caspian Sea to the Black Sea and the Mediterranean, working together with Azerbaijan, Georgia, and Turkey, as well as the State Oil Companies. The coastlines of the Caspian are shared by Azerbaijan, Iran, Kazakhstan, Russia, and Turkmenistan. The Caspian is divided into three distinct physical regions, i.e., the Northern, Middle, and Southern Caspian. These states have abundant natural reservoirs and the potential for enhancing trade and commerce activities.   On 29th June 2022, the sixth summit of the Heads of Caspian littoral states was held at Ashgabat, the capital of Turkmenistan. During the summit, important meetings were held among the Heads of States. This timely and significant summit has been organized under evolving socioeconomic dynamics and the need for such channels to engage in a productive joint mechanism. This interaction has paved the way for future regional connectivity via corridors and provided a new impetus to multilateral relations. Moreover, the legal framework of cooperation among Caspian littoral states is being strengthened. Many agreements have been signed and entered into force in various areas, i.e., security, hydrometeorology, transport, conservation and rational use of aquatic biological resources, prevention/elimination of emergency situations, and other areas of mutual interest.

Due to the Covid-19 pandemic, the geopolitical tensions and disruption of supply chains were galvanized. However, this summit has brought new benefits for joint ventures with a shared forward-looking spirit for these five states. The traditional logistic chains and transport corridor interconnectivity have become key factors for sustainable growth and promoting economic ties between states. In this aspect, the pivotal role of the Trans-Caspian international transport route will ensure transit flows between Europe, Central Asia and Caspian littoral states.

The Caspian “five” has tremendous potential for economic and energy cooperation. By revitalizing economic connectivity, regional alignment and people-to-people contacts will be enhanced. This broader integration will provide a win-win cooperative framework and avoid any conventional rivalry. In the 21st century, orthodox and dysfunctional principles have been replaced by advanced systems and ideas. Thereby, it is crucial to understand the utility of new logistic, economic, and energy corridors. Good transportation routes are necessary to make Caspian economies more diversified and competitive. It is noteworthy that the five Caspian littoral states have been fulfilling the agreements on joint cooperation of the offshore oil and gas fields in the Caspian Sea. In this aspect, the natural wealth of the Caspian Sea will rationally and effectively serve the interests of all parties.

In 2019, an accord was signed between the Caspian littoral states on a transport corridor, which aimed at transforming the region into a major international logistic hub. This accord will facilitate economic expansion at the global level. In this direction, Azerbaijan, Turkmenistan, and Russia have been playing a proactive role in adopting and implementing the Strategy for the Development of National Seaports in the Caspian Sea, along with rail and road approaches until 2030. Furthermore, strengthening the regional tourism sector is also one of the major priority areas in bringing Caspian nations together. According to a news, the first cruise ship on the Caspian Sea will be commissioned in the Astrakhan Region next year. Themed Caspian Sea cruises will improve people’s knowledge of the rich historical traditions and the legacy of the Caspian littoral states. It will also provide a great opportunity for people to visit landmarks and attend cultural and educational events.

It is significant to highlight here that His Excellency President Ilham Aliyev has been playing a robust role to enhance economic connectivity through establishing corridors and sea routes. On the other hand, Turkmenistan, under the leadership of President Serdar Berdimuhamedow, has been advocating the concept of regional connectivity. Both visionary leaders have left no stone unturned to enhance cooperation and coordination among Caspian Five. The successful conduct of statecraft by both leaders will facilitate joint projects for all regional countries.

The priority task of the Caspian ‘’Five’’ is to strengthen sustainable development and economic alignment in the Caspian region via corridors. The sixth summit of Caspian littoral states demonstrates that all five countries are interested in building strong multilateral relations for greater regional prosperity and resolving common challenges with a holistic approach. Robust policies and plans for future actions under the recent summit will establish modern methods for joint cooperation. Caspian Sea is a sea of unlimited opportunities and natural reservoirs. Thus, these five Caspian states are working diligently to achieve common aspirations. It can be anticipated that new agreements on the establishment of corridors will pave the way for deepening cooperation in various areas among the Caspian littoral states.

Khalid Taimur Akram is the Executive Director of the Pakistan Research Center for a Community with Shared Future (PRCCSF).