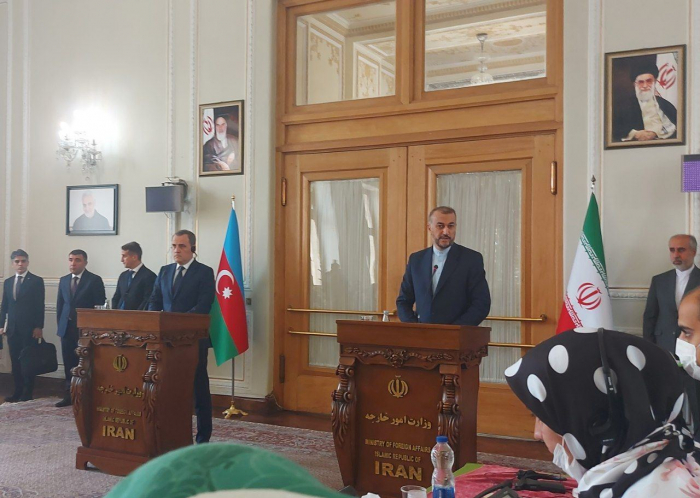 He made the remark at a joint press conference with Azerbaijani Foreign Minister Jeyhun Bayramov in Tehran on July 4.

According to Amir Abdollahian, in today's discussions, the importance of the territorial integrity of countries, including Azerbaijan, was noted again.

"In the new era, regional formats existing between Iran and Azerbaijan or among Iran and other regional countries should be in the spotlight. Within one of the regional formats, a meeting of the foreign ministers of Iran, Azerbaijan and Türkiye will soon be held in Tehran,” he said.

Iranian FM noted that another meeting will be held within the framework of the '3+3' format with the participation of high-level experts. In the first stage, the meeting will be held at the level of high-level experts among Azerbaijan, Armenia, Georgia, Russia, Iran and Türkiye, while in the next step at the level of foreign ministers of the mentioned countries in Tehran or another city of Iran.

Amir Abdollahian also added that energy and transit are two important issues in economic cooperation between Iran and Azerbaijan. At today's meeting, electricity exchange between the two countries was discussed. During the visit of Iranian Energy Minister Ali Akbar Mehrabian to Azerbaijan, the final agreement on electricity exchange will be reached.

“At today's meeting, talks were also conducted on the environmental situation of the Araz River. The reasons polluting the Araz River in Iran and Azerbaijan have been identified,” Amir Abdollahian pointed out.

The minister emphasized that a remarkable increase in trade turnover between the two countries was recorded over the past months. It is hoped that both countries' public and private sectors will pay special attention to increasing trade turnover.