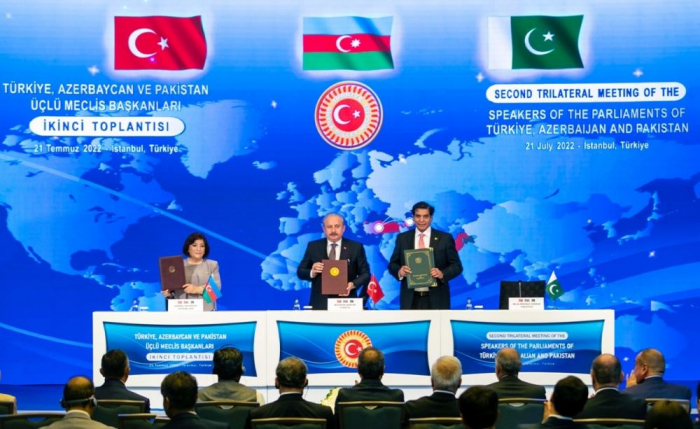 The second Trilateral Meeting of the speakers of the Azerbaijani, Turkish and Pakistani parliaments held in Istanbul was concluded with the signing of the Istanbul Declaration and the joint press statement of the speakers that followed the inking ceremony, AzVision.az reports citing the Milli Majlis press service.

Speaker of the Grand National Assembly of Turkiye Mustafa Sentop and President of the National Assembly of the Islamic Republic of Pakistan Raja Pervaiz Ashraf said at the event that the signed declaration was immensely important since it was going to bring about a further advance in the relations amongst our countries.

As she greeted the session participants on behalf of the delegation of the Milli Majlis of Azerbaijan, Speaker Sahiba Gafarova voiced pleasure with another visit to the brotherly Republic of Türkiye. Gafarova thanked his Turkish counterpart Mustafa Sentop for the invitation to the second trilateral meeting, for the hospitality and for the high level of arrangement achieved in the second joint meeting of the leaders of the Azerbaijani, Pakistani and Turkish legislatures.

Gafarova recalled the recent celebration in the brotherly Turkiye of the 15th of July the Democracy and National Unity Day, saying that the people and state of Azerbaijan had condemned the treacherous coup d’état attempt from the very first minutes and had taken their place right next to Turkey as ever.

The first Trilateral Meeting of the leaders of the Azerbaijani, Pakistani and Turkish parliaments was held upon the instance of the Milli Majlis approximately a year ago.