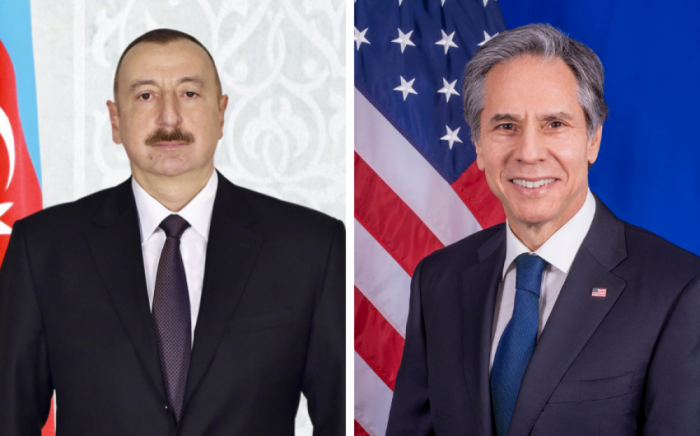 On July 25, U.S. Secretary of State Antony Blinken made a phone call to President of the Republic of Azerbaijan Ilham Aliyev.

Noting that the United States supports the normalization of relations between Armenia and Azerbaijan, Secretary of State Antony Blinken hailed the meeting and direct dialogue between the foreign ministers of the two countries in Tbilisi.

President Ilham Aliyev described the meeting of the foreign ministers of Azerbaijan and Armenia held in Tbilisi as the first step towards starting negotiations on a peace treaty between the two countries. The head of state said that Azerbaijan has already formed the composition of its commission on the preparation of the peace treaty and expects the same step to be taken by Armenia.

Antony Blinken also pointed out that the United States is ready for the opening of transport connections and communications between Armenia and Azerbaijan, as well as to provide technical support in this regard.

During the conversation, the sides stressed the importance of the recently signed Memorandum of Understanding in the field of energy between Azerbaijan and the European Commission.

Touching upon the humanitarian issues, the head of state stated that more than 3,890 Azerbaijanis had been considered missing persons since the first Armenian-Azerbaijani war, and highlighted the fact that despite repeated appeals to the Armenian side, no information had been provided on the locations of mass graves.

President Ilham Aliyev underlined that the liberated territories of Azerbaijan were mined massively by Armenia, and more than 240 Azerbaijani citizens had died or had their health damaged in mine explosions since the end of the war.

During the phone conversation, the sides exchanged views on the prospects for cooperation.