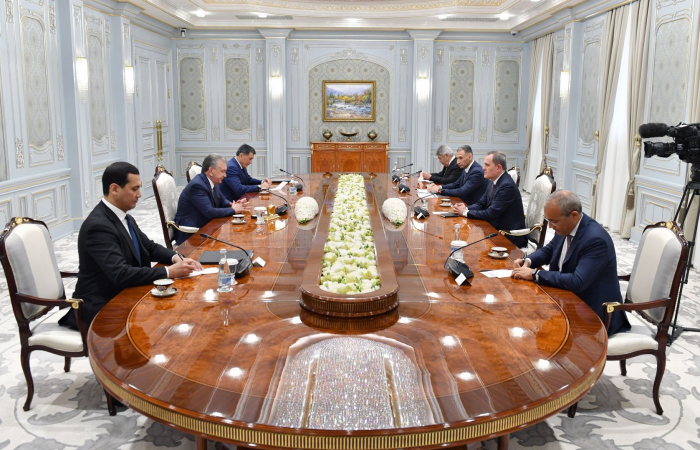 President of Uzbekistan Shavkat Mirziyoyev received Azerbaijani Foreign Minister Jeyhun Bayramov, Minister of Economy Minister Mikayil Jabbarov and Minister of Digital Development and Transport Rashad Nabiyev, who arrived in Tashkent to participate in the first trilateral meeting of the Ministers of Foreign Affairs, Economy and Transport of Azerbaijan, Türkiye and Uzbekistan, AzVision.az reports citing the press service of Azerbaijani MFA.

During the meeting Mirziyoyev conveyed his warmest meetings to President of Azerbaijan Ilham Aliyev. He recalled the visit of Azerbaijani president to Uzbekistan back in June of this year. Mirziyoyev highly appreciated the work done in a short time in accordance with the agreements reached during the visit.

Furthermore, the importance of the first historic meeting of the ministers of foreign affairs, economy and transport of Azerbaijan, Türkiye and Uzbekistan, which took place today, was stressed.

Minister of Foreign Affairs Jeyhun Bayramov conveyed the best wishes of Azerbaijani President Ilham Aliyev to the president of Uzbekistan. In accordance with the instructions of the heads of the state, the need to implement practical measures to fulfill the obligations arising both from the results of the meeting of the bilateral intergovernmental commission and from the Tashkent Declaration adopted was noted. Gratitude was expressed to Uzbek president for organizing a meeting in a trilateral format at a high level.