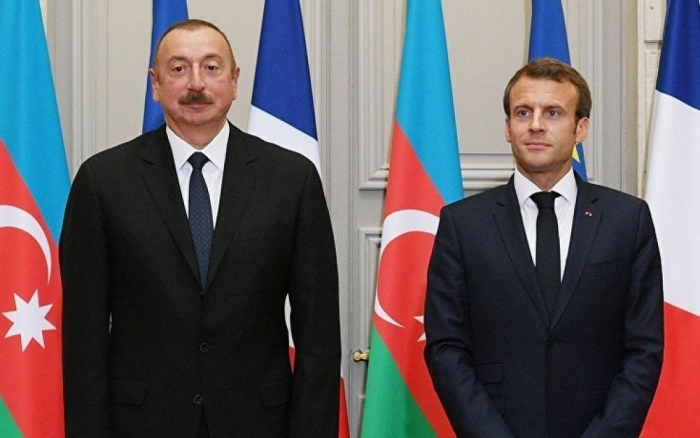 During the telephone conversation, Emmanuel Macron expressed his concern about the tension that has arisen in the region in recent days, and stressed the importance of continuing the negotiations between Armenia and Azerbaijan and implementing the provisions of the trilateral Statement dated November 10, 2020. He said that France is ready to support the continuation of the dialogue between the two countries.

President Ilham Aliyev noted that another military provocation was committed by Armenia and that an Azerbaijani serviceman was killed as a result of this provocation in the territory of Azerbaijan, where Russian peacekeeping forces were temporarily deployed. The head of state said that the Azerbaijan Armed Forces prevented this provocation and took necessary countermeasures, adding that the entire responsibility for the tension that occurred lies with Armenia.

President Ilham Aliyev noted that the Armenian armed forces and elements of illegal Armenian armed detachments, which continue to exist in the Karabakh region of Azerbaijan, must be removed from the country`s territory. “However, this has not yet been provided by Armenia. This, in turn, is a violation of the provisions of the November 10, 2020 Statement by the official Yerevan and Armenia's failure to fulfill its obligations.”

The head of state emphasized that as a result of the agreement reached with the Ministry of Defense of Russia in accordance with the provisions of the trilateral Statement, the route of the new alternative road to the Lachin corridor was determined and the construction of this road by Azerbaijan is about to be completed. “As soon as these works are completed, according to the trilateral Statement dated November 10, 2020, it is planned to redeploy Russian peacekeeping forces to that road.”

During the phone conversation, the sides exchanged views on other issues of mutual interest.