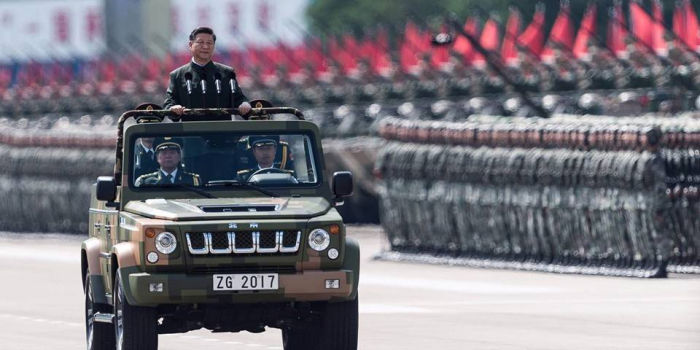 Increasingly, it appears that China's president is turning to nationalism as a substitute for economic growth as a source of political legitimacy. And when it comes to generating popular support in China, nothing competes with asserting the mainland’s sovereignty over Taiwan.

Much of the foreign-policy conversation in the United States over the past two weeks has centered on whether US Speaker of the House Nancy Pelosi ought to have visited Taiwan. Her backers point out that there was precedent for such a visit – a previous speaker and cabinet members had visited Taiwan – and that it is important for officials to underscore the US commitment to Taiwan in the face of increasing Chinese pressure. But critics argued that the trip was ill-timed, because Chinese President Xi Jinping would likely feel a need to respond, lest he appear weak heading into a critical Party Congress this fall. There were also worries that the visit might lead Xi to do more to support Russia’s aggression in Ukraine.

But the focus on Pelosi’s visit is misplaced. The important question is why China responded not just by denouncing the trip, but with import and export bans, cyberattacks, and military exercises that represented a major escalation over anything it had previously done to punish and intimidate Taiwan.

None of this was inevitable. The Chinese leadership had options. It could have ignored or downplayed Pelosi’s visit. What we saw was a reaction – more accurately, an overreaction – of choice. The scale and complexity of the response indicates that it had long been planned, suggesting that if the Pelosi trip had not taken place, some other development would have been cited as a pretext to “justify” China’s actions.

China’s increasingly fraught internal political and economic situation goes a long way toward explaining Xi’s reaction. His priority is to be appointed to an unprecedented third term as leader of the Communist Party of China; but the country’s economic performance, for decades the principal source of legitimacy for China’s leaders, can no longer be counted on as growth slows, unemployment rises, and financial bubbles burst. Xi’s insistence on maintaining a zero-COVID policy is also drawing criticism domestically and reducing economic growth.

Increasingly, it appears that Xi is turning to nationalism as a substitute. When it comes to generating popular support in China, nothing competes with asserting the mainland’s sovereignty over Taiwan.

China’s willingness to escalate tensions also reflects its growing comfort with risk and the poor state of China’s relations with the US. Any hope in Beijing that ties might improve in the aftermath of Donald Trump’s presidency has been dashed by President Joe Biden’s administration, which has largely extended the China policy it inherited. Public recriminations are frequent, and private dialogues are rare. Tariffs on imports from China remain in place. Xi thus likely concluded that he had little to lose in responding to Pelosi’s visit. His subsequent decision to cut off numerous dialogues with the US – including those on climate change and drug trafficking – demonstrates his comfort with deteriorating relations.

The danger is obvious. With China indicating that its military activities close to Taiwan are the new normal, there is greater risk of an accident that spirals out of control. Even more dangerous is that China will determine that “peaceful reunification” is fading as a real option – in no small part because China alienated many Taiwanese when it violated its commitment to “one country, two systems” after it regained control of Hong Kong. In such a scenario, China may decide that it must act militarily against Taiwan to bring an end to the democratic example Taiwan sets and to head off any perceived move toward independence.

So, what is to be done? Now that China has demonstrated its will and ability to use its increasingly capable military farther afield, deterrence must be re-established. This calls for strengthening Taiwan’s ability to resist any Chinese use of force, increasing US and Japanese military presence and coordination, and explicitly pledging to come to Taiwan’s defense if necessary. It will be important to demonstrate that the US and its partners are not so preoccupied with Russia that they are unable or unwilling to protect Taiwan.

Second, economic relations with China need to be recast. Taiwan and others in Asia, including Japan and South Korea, as well as countries in Europe, have grown so dependent on access to the Chinese market and imports from China that, in a crisis, sanctions might not be a viable policy tool. Even worse, China might be in a position to use economic leverage against others to influence their actions. The time has come to reduce the level of trade dependence on China.

The US also needs a sensible and disciplined Taiwan policy. The US should continue to stand by its one-China policy, which for over 40 years has finessed the ultimate relationship between the mainland and Taiwan. There is no place for unilateral action, be it aggression by the mainland or assertions of independence by Taiwan. Final status will be what it will be; what should matter from the US perspective is that it be determined peacefully and with the consent of the Taiwanese people.

A concerted effort to build a modern relationship between the US and China is also essential. It is diplomatic negligence, even malpractice, to allow the era’s most important bilateral relationship, which will go a long way toward defining this century’s geopolitics, to continue to drift. Establishing a private, high-level dialogue that addresses the most important regional and global issues, be they sources of friction or potential cooperation, should be a high priority. What should not be a high priority is attempting to transform China’s politics, which would prove impossible while poisoning the bilateral relationship.

Never allow a crisis to go to waste, the old saying goes. The current crisis over Taiwan is no exception. It is a wake-up call for Washington and Taipei, as well as for their strategic partners in Europe and Asia, and it should be heeded while there is still time and opportunity to do so.