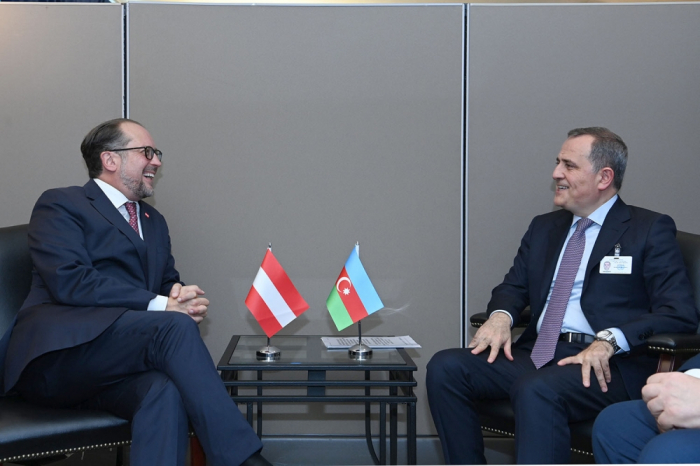 Azerbaijan’s Minister of Foreign Affairs Jeyhun Bayramov has met with Federal Minister for European and International Affairs of the Republic of Austria Alexander Schallenberg on the sidelines of the high-level week of the 77th session of the UN General Assembly, AzVision.az reports citing the Foreign Ministry.

Bilateral cooperation issues, prospects of Azerbaijan-Austria relations, energy security, and the latest regional situation were discussed at the meeting.

Minister Jeyhun Bayramov provided an insight into the large-scale restoration and reconstruction work carried out in the post-conflict period. Noting that the elimination of the factor of occupation has created opportunities for the normalization of relations between the two countries, and the promotion of peace-building initiatives by Azerbaijan, he emphasized the obstruction of the processes by Armenia despite the above-mentioned facts and highlighted Armenia's large-scale provocations. He pointed out that Azerbaijan is interested in efforts to create peace and stability in the region and in solving the current problems at the political level.

The Austrian Minister stated that the situation in the region is a cause for concern and stressed the importance of the ceasefire and the return to the negotiations. Austria noted the necessity of ensuring Europe's energy security, and in this regard, noted the importance of the memorandum of understanding signed between Azerbaijan and the European Union on July 18 of this year.

The sides also discussed cooperation issues between Azerbaijan and the European Union, as well as other issues of mutual interest.