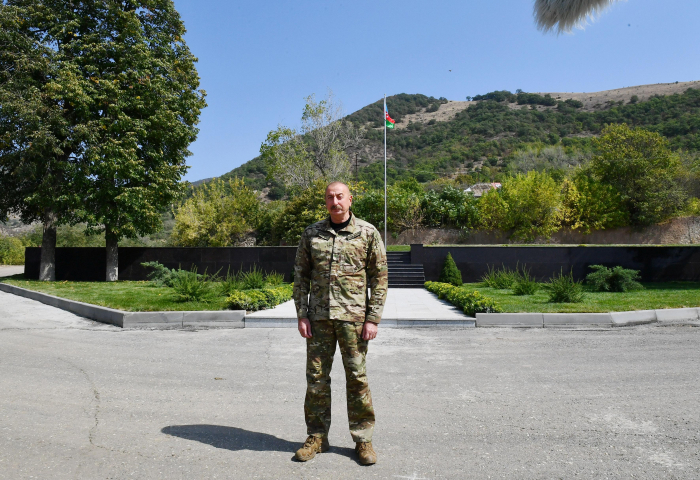 The liberation of the city of Lachin will remain in history forever, Azerbaijan’s President Ilham Aliyev said on Wednesday, AzVision.az reports.

Delivering a speech after raising the Azerbaijani flag in Lachin city, President Aliyev said that at the end of the 44-day Patriotic War, Armenia was forced to sign an act of capitulation, thus acknowledging Azerbaijan’s historic victory.

“As a result of the act of capitulation, Armenia had to remove its troops from the occupied part of Aghdam, Kalbajar and Lachin districts, and so it did,” he said.

The head of state recalled that a part of Lachin and Kalbajar districts had been liberated during the 44-day Patriotic War.

“The southern part of Lachin and the northern part of Kalbajar was freed from the occupiers by the victorious Azerbaijani army. However, the city of Lachin was not under our control. The reason for that was the fact that the automobile road connecting Armenia with Khankendi passed through the center of the city, which was why we were unable to take control over the city of Lachin. However, as a result of negotiations on 9 November, the construction of an alternative way was incorporated into the document on my insistence and consultations were to be carried out on the construction of a new road in three years. We completed the consultations earlier than that, the route of the new road was agreed with the Russian side and prompt measures to start the construction of the new road. This period took a total of a year and eight months. In other words, an alternative road was ready after a year and eight months. We issued an official notification that the road would be ready on 2 August 2, that Azerbaijan would enter the city of Lachin, including the old road, on August 5, thus returning to Lachin. After that, the Armenians living in Karabakh asked us to give them additional time until 25 August. Although there was illegal settlement here, we showed humanism and gave them this opportunity. Thus, on 26 August, the Azerbaijani Army entered the city of Lachin and we regained the city of Lachin,” he said.

“This is a historic event. The liberation of Lachin will remain in history forever. Today, I raised the Azerbaijani flag in the city center, in the central street of Lachin. This flag will fly here forever,” President Aliyev added.