President Aliyev: "We are in favorable positions on the Azerbaijan-Armenia border" 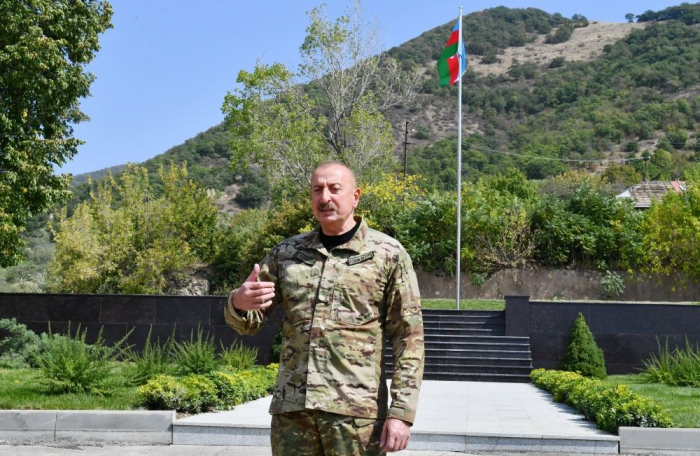 "We are in favorable positions on the Azerbaijan-Armenia border all the way from Mount Murov to the Araz River," Azerbaijani President Ilham Aliyev said after raising the Azerbaijani flag in the city of Lachin, AzVision.az reports.

The head of state noted that in the past few years, Armenia has committed repeated military provocations against Azerbaijan.

“More than 1,400 new landmines were planted in Lachin district alone, and these mines were planted in 2021, i.e. after the war. This is an open act of terror against Azerbaijan. Since the war ended, more than 240 Azerbaijani citizens were either killed or seriously injured as a result of landmine blasts. In other words, the war against us continues and our people are dying. Can we allow this to happen? We can never allow that to happen. We have repeatedly warned Armenia to stop these dirty deeds, or it will regret it,” he said.

“As a result, when another provocation was committed against us on 13 September, the Azerbaijani Army responded and put the enemy back in place yet again. I do hope that this will finally teach them a lesson. Because they saw that no-one and nothing could stop us. No-one's call, no statements or initiatives can stop us. We are on our own land and we are protecting our own land. Our positions along the border allow us the opportunity to anticipate any Armenian provocation and take necessary measures. We are in favorable positions on the Azerbaijan-Armenia border all the way from Mount Murov to the Araz River. These positions give us both a military advantage and the possibility of visual control over a large area, including control over important communication lines, and we are already based in these areas. We didn’t have access to these borders for 30 years,” President Aliyev added.