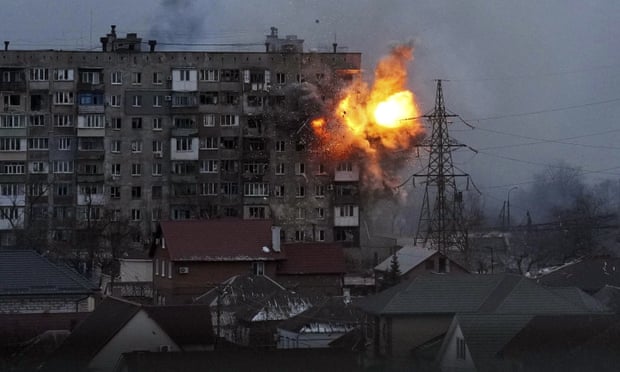 The head of the Office of the Ukrainian Presidency has called for sweeping American and European sanctions targeting Moscow after an official report drawn up by an international working group concluded Russia should now be declared a “state sponsor of terrorism”.

The call from Andriy Yermak, the second most powerful Ukrainian government official after president Volodymyr Zelenskiy, came after Ukraine accused Russia of sabotage of the Nord Stream pipelines, an accusation that adds to its claim that Russia has shown all the characteristics of a terrorist state under US and international law.

Such a designation, resisted so far by the US administration, would allow for secondary sanctions to be imposed on any entity or individual trading or supporting Russia government bodies, including state-owned banks. It would also allow US nationals and employees to sue Russia for money damages or material compensation for personal injury or death caused by the Russian state’s terrorism. Russians seeking to enter the US would face heightened restrictions.

Yermak praised existing sanctions, but said the impact had not been decisive, adding: “It is often said that money is like water: it always finds a way to flow. To combat this, the west needs to double down on existing sanctions.”

He was speaking after a report by an international working group on sanctions advising the Ukrainian government concluded that Russia had reached the legal definition of a “terrorist state” under US and Canadian law. Such a designation has only ever been handed to North Korea, Syria, Iran, and Cuba, and would probably result in Russia’s complete ejection from the financial system, and raise fresh questions about its status as a UN security council member.

The report, drawn up by leading lawyers, economists and diplomats and published on Thursday, said: “The essence of terrorism can be well summarised as ‘premeditated, politically motivated violence perpetrated against non-combatant targets’.”

This satellite photo from Planet Labs PBC shows a large disturbance caused by natural gas leaking into the sea off the coast of the Danish island of Bornholm.

It said horrific events in Ukraine were “not one-off instances [involving] rogue elements of the Russian armed forces” but were “designed and conducted with the specific intent of terrorising the Ukrainian population”. Since the Russian state was the main perpetrator, it went beyond being a sponsor of terrorism, the report said.

The instances cited that could be deemed terrorism include events in the Ukrainian town of Bucha, where international experts found evidence of rape, torture, waterboarding and sexual violence, the firing of Russian missiles at a shopping mall in Kremenchuk, killing at least 20 people and injuring dozens more, and during the siege of Mariupol, when the Russian assault killed as many as 22,000 civilians and destroyed 95% of the city.

The report was prepared by a sanctions committee including Michael McFaul, the former US ambassador to Russia and was commissioned by Yermak.

The authors admit that there is a risk that such an extreme measure may prove counterproductive, for instance by scuppering the fragile deal to allow the export of Ukrainian grain through the Black Sea. But they say mitigation measures are available, including a US government statement that its citizens could not sue Russia individually, so eating into Russian state assets held abroad.

The report said “the time for incrementalism is over”. It said: “Through its actions in their war against Ukraine, the Russian Federation has met or exceeded any reasonable legal or policy threshold for designating as a state sponsor of terrorism with respect to other nations and entities currently holding the designation.

“War crimes versus acts of terrorism are distinctions without a difference. The kind, extent, and purpose of premeditated, politically motivated violence that the Russian state is deploying against Ukrainian noncombatants is shocking. It demands a response.”