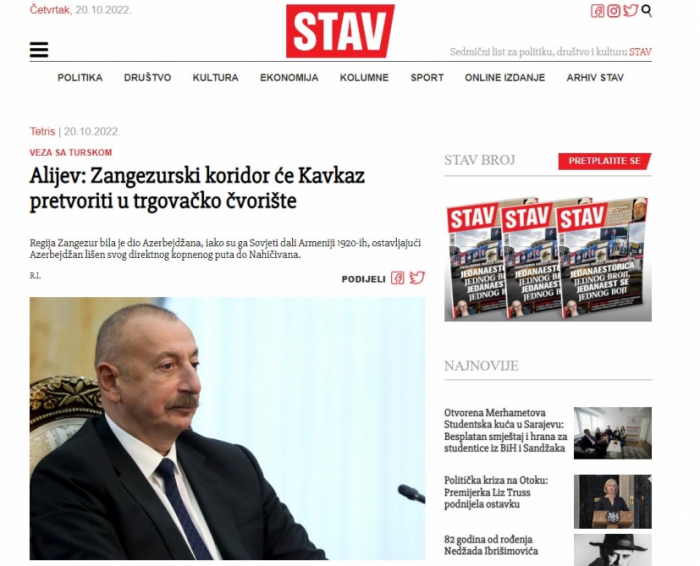 The internet portal of Bosnia and Herzegovina’s “Stav” magazine has published an article highlighting the importance of implementation of Azerbaijan’s Zangazur corridor project.

Headlined “Ilham Aliyev: Zangazur corridor will turn Caucasus into trade hub”, the article quoted Azerbaijani President Ilham Aliyev as saying during his message to participants of the 2nd Azerbaijan International Exhibition “Restoration, Reconstruction and Development of Karabakh” ‒ “Rebuild Karabakh” and the 27th Azerbaijan International Construction Exhibition: “The implementation of the Zangazur corridor project will turn the region into an important transport and trade hub. In other words, the liberated territories are being rapidly restored, and our goals related to the Great Return are being successfully fulfilled.”

“Historically, Karabakh was one of the most developed regions of Azerbaijan. Unable to come to terms with the occupation of these territories by Armenia for nearly 30 years, Azerbaijan restored historical justice and territorial integrity in the 44-day Patriotic War. Our people, who showed unity and solidarity in achieving the Glorious Victory, are now returning to their homeland, to native Karabakh, and will live on these lands forever,” the head of state emphasized.

The article, citing the statement by Azerbaijan’s Foreign Ministry said: “Armenia should cease fake pretexts to evade from its commitments under Trilateral Statement of Nov 2020 to link auto/railroads through Zangazur corridor.”