The resolution adopted recently by the French Senate on Azerbaijan will create a lot of misunderstanding between the two countries, said Nathalie Goulet, Senator of France, who was the only one among 296 members to vote against this resolution, AzVision.az reports.

She was commenting on the resolution adopted by the French Senate on November 15, 2022, called “The application of sanctions against Azerbaijan and its immediate withdrawal from the territory of Armenia, the demand to comply with the ceasefire agreement dated November 9, 2020, and the promotion of all initiatives aimed at establishing sustainable peace between the two countries”.

“Most part of my colleagues have a lot of Armenians in their constituency. They also misread the conflict as a conflict between Christian Armenians and Muslim Azerbaijanis. All mixed up! They have one single version and are not looking for both party position. The Armenian lobby is very strong and powerful especially in the newspapers and TV. It will not help and will create a lot of misunderstanding. The parliament is different from the president and the government which are more balanced. It’s a very bad sign for a balanced position. I think France lost its credibility as a co-chair of Minsk Group,” added Goulet. 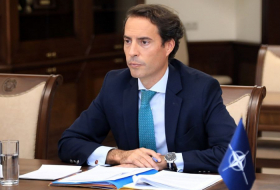