Türkiye will not allow existence, activities of any terrorist group in region: National Security Council 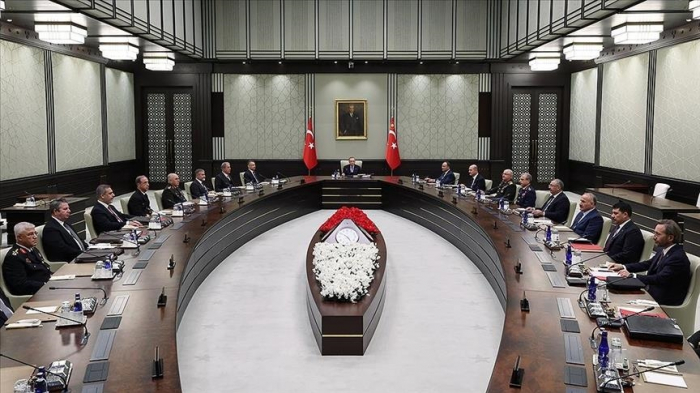 Türkiye will not allow the existence and activities of any terrorist group in its region, the country’s National Security Council said on Thursday, AzVision.az reports citing Anadolu Agency.

In a statement released after over three-hour meeting of the National Security Council under the chairmanship of President Recep Tayyip Erdogan in the capital Ankara, the council said: "The existence and activity of any terrorist group will not be allowed in our region, and every necessary step will be taken decisively for this."

To ensure the defense and security of the Turkish nation and its borders, the only target in the operations, which are being carried out along its southern borders in line with the right of self-defense under Article 51 of the UN Charter, are terrorist organizations, it said.

The counter-terrorism operations and their success both at home and abroad were briefed upon, and additional measures were discussed during the meeting of the council, the statement said.

Recently, Türkiye launched Operation Claw-Sword in northern Iraq and Syria, a cross-border aerial campaign against the PKK/YPG terrorist group, which has illegal hideouts across the Iraqi and Syrian borders where they plan and sometimes execute attacks on Turkish soil.

The council also emphasizes that Ankara expects Greece, "which is indifferent to Türkiye's conciliatory and sincere approach and solution-oriented dialogue proposals," to end its activities that violate international law and agreements, especially the arming of the Aegean islands that have non-military status.

Türkiye, a NATO member for over 70 years, has complained of repeated provocative actions and rhetoric by Greece in the region in recent months, including arming islands near Turkish shores that are demilitarized under treaty obligations, saying such moves frustrate its good faith efforts towards peace.

Recent developments in Bosnia and Herzegovina, and Kosovo were also evaluated in the meeting, it said, adding that in order to preserve the stability, peace and tranquility in the region, "separatist discourses and unilateral initiatives" should be avoided.

Welcoming the acceptance of the Turkish Republic of Northern Cyprus (TRNC) as an observer member in the Organization of Turkic States, the council said it expects similar steps from other international organizations and countries.