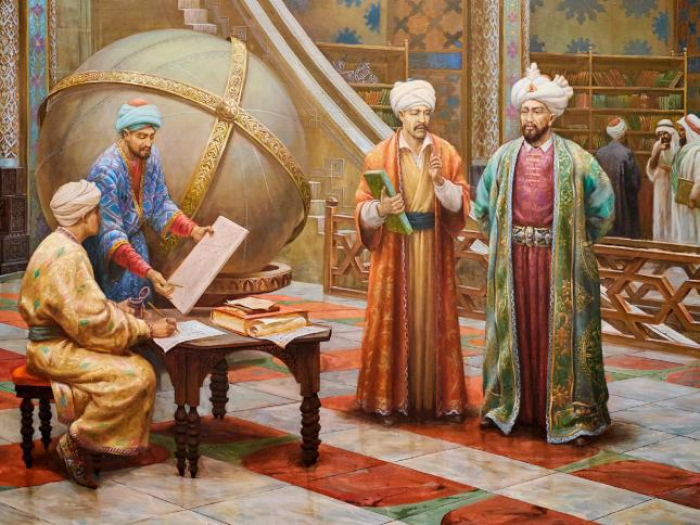 ‘The Turkic and Islamic civilizations are so integrated into one another that it is difficult to see them separately at times. The Turks had their own system of values based on statehood, the army, family, and humanity. We see traces of similarity to modern democracy in the rules religiously followed by the ancient Turks. For example, the Turks had adhered to the rule of law from the very beginning. This manifested in the concept of ‘tora’. While the Khagan’s power was absolute, he could not violate the rules set by the ‘tora’. The Khagan’s power to ‘tora’ – issue orders – was limited to another concept called the ‘toy’ – the ‘gurultay’ (congress). These were established state relations that followed a strict protocol.

AzVision.az spoke to Namig Mammadov, turkologist, History PhD, and lead researcher at the Institute of Oriental Studies named after Academician Ziya Bunyadov at Azerbaijan National Academy of Sciences. He says the modern world usually views the ancient Turks as nomadic tribes, which is quite a shallow approach:

‘Humanism was one of the main values of the ancient Turks. If we pay closer attention to the society they had shaped, one will see that there was no concept of class. People were not divided into classes as was the case during feudalism or capitalism which happened much later. For example, they had no clerical cast. We, in general, do not see a ‘cast’ concept whatsoever. Everybody was equal. One of the functions of the ruler was to protect that concept of ‘equality’.

These aspects took on a new value as Islam arrived. The values that were already engraved into the original Turkic societies, such as humanism, equality, and concepts of human rights and freedom, were reinforced through Islam, which was undeniably originated by the Arabs. However, it was the Turks who further developed and spread it all over the world. The world still benefits from the military culture of the Turks and the military system shaped back in Mehdi Khan’s time. The Turks came up with the arrangement of dividing military units into tens, hundreds and thousands based on branching. In other words, studying universal military history and army system requires revisiting the Turkic history, because this was their direct lifestyle. Being a Turk also meant being a warrior. The Khagan’s duty was to keep those warriors under a certain order.’

- Some experts say that the nomadic lifestyle of the Turks spread development from Eurasia to the West through military raids and exercises, introducing their own values and adopting some core qualities of the cultures they visited. Would you agree?

‘Throughout the European history before Turks, that is during the Roman Empire, the foundation of the economic system of the society was this large mass of slaves. These were oppressed people, captured in wars, and essentially not treated as human beings. They worked for food or were seen as a means of entertainment. The arrival of the Turks replaced this collapsed civilization with a new one.

What is a civilization? It is considered the most advanced stage of humanism and the organization of new socio-political relations. The Turks did not have a concept of slavery wherever they went. They appreciated the supreme value of humanism. When they took over a territory, they demanded the local people obey them. However, the Turkic concept of obedience meant deferring to a certain tribe and building a certain order. In worst-case scenarios, they taxed the local population. Those people carried on their habitual lifestyles, thus establishing certain relations with the newcomers. Moreover, the Turks even took it upon themselves to protect their new subordinates. They did not much employ them in the army.

This introduced a new economic and political formation in Europe. As the Turks arrived, slavery in Europe was replaced by a new system – feudal social relations – which was a giant leap compared to slavery.’

- What role does the Turkic world play in the universal civilization and what is their contribution to modern history?

‘As Azerbaijan and Central Asian peoples became a part of the Russian Empire, the intelligentsia started expressing themselves in a new language, mostly in Russian. This led to a split, but they managed to retain their core values.

After the collapse of the Soviet Empire, starting in the early 21st century, Turkey took on a renewed position and a stance of leadership in restoring the previous glory of the Turkic civilization. The first choice of rapprochement was certainly cultural and economic ties. We saw the full force of this harmony after the 2020 events. The Shusha Declaration signed after Azerbaijan’s victory in the 44-day war, became a new impetus, which means the opening of the economic door among the Turkic states through the Zangezur Corridor. This is the restoration of the former Silk Road, which historically ran through the Turkic territories and made it flourish, which will turn the Central Asian Turks, Azerbaijan, and Turkey into key players in the region, greatly reviving the Turkic civilization.’

- Is it the restoration of the same bridge you mentioned?

‘Exactly. This is the restoration of the same bridge in a new format. Seven Turkic states have established an organization and we are already seeing the future potential development. The vision defined by Turkey and other Turkic states is to consolidate efforts into a confederation, a new power centre. We will get to witness this firsthand.’

- Have Turks historically been proponents of integration between civilizations or conflict? How have they identified themselves?

‘There are different concepts. Turks are people who have been proponents of strengthening and developing the values I already mentioned at all stages of universal history and spreading the Islamic culture throughout the world, starting from India and China to Europe. Turks were mainly the spreaders of Islam after the 8th century. They were introduced to it in the 7th century. The Islamic values greatly resonated with the cultural values that had been a part of the Turkic mentality. From that standpoint, it was logical that they were the spokesmen for preserving and spreading that culture. They have historically played a central role in integrating civilizations. Just as they connected China to Europe through the Silk Road, the Turks will once again be the main actors in connecting the West to the East in modern history.’

- The Turkic world has always acted as a supporter of integration and mutual relations. I wonder why certain circles in the West insist on a clash of civilizations.

‘They are afraid that their culture will dissolve into the Turkic civilization, which is why they are putting forward a collision scenario. Our culture and values are capable of absorbing any surroundings they fall into because it is superior and more humane.’

‘If we mean the historically developed values among Turks when we talk of traditional values, they have sustained them for centuries. Some empires such as the Safavids or the Ottomans have even expanded and disseminated them among other peoples, keeping them under control. The minorities that used to be a part of the Ottoman state are still preserving and even yearning for those values, because humanity was elevated to be the supreme merit. Let’s take the Armenians, who lived under the Ottomans, for instance. If the Armenians had done what they had to the Turks to any other state, any other European nation, those states would have stamped the Armenians out of existence. At the same time, the Armenians owe their survival to the Turks.

There are more examples. The Ottomans had protected the Jews and representatives of this religion living within their empire. It was the great Ottoman Empire that had protected the Jews and given them a home in their lands, especially during the 1492 persecutions in Spain and the Arab reign. There are values that are not born by every nation in the world. Sometimes, you need to be a true Turk to appreciate the value of others, respect and greatness. The Turks, bearers of these values, have always practised them in their everyday life and will pass them onto the future generations.’