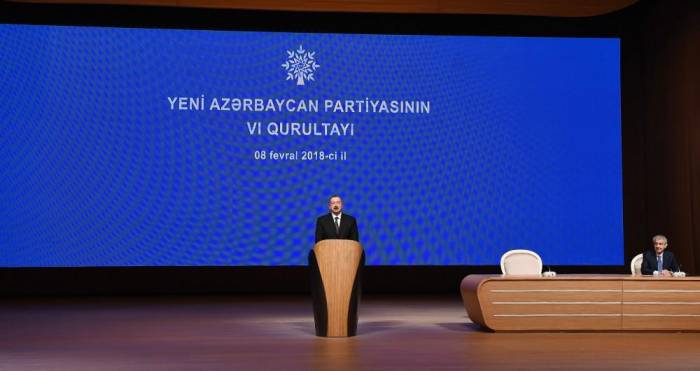 The VI Congress of the New Azerbaijan Party (NAP) has today kicked off at the Heydar Aliyev Center in Baku.

President of Azerbaijan, Chairman of the NAP Ilham Aliyev is addressing the congress, which is attended by more than 700 members of the NAP.

The head of state highlighted the history of the founding of the New Azerbaijan Party as well as the services of the founder of the party, national leader Heydar Aliyev and the party`s role in the life of the country and society.

Addressing the event, resident of Jojug Marjanli village, which was liberated from the occupation, Ogtay Haziyev, chairman of the YAP Kangarli regional branch Sevda Guliyeva, MP Rashad Mahmudov, businessman from Ganja Elnur Jamalkhanov, director of the Heydar Aliyev Center in Gusar Neva Abdurahmanova, and student of ADA University Emil Aslanli highlighted large-scale construction works carried out in Azerbaijan, and the achievements gained under the leadership of President Ilham Aliyev.

The speakers proposed putting forward candidacy of the party's chairman Ilham Aliyev for the early presidential election to be held on 11 April, 2018.

YAP Deputy Chairman and Executive Secretary Ali Ahmadov read out the decision of the Congress to nominate party leader Ilham Aliyev for the presidential election.

The decision was unanimously adopted.

Chairman of the New Azerbaijan Party, President Ilham Aliyev thanked the party members for the confidence.

The 6th Congress of the New Azerbaijan Party ended with the performance of the national anthem.