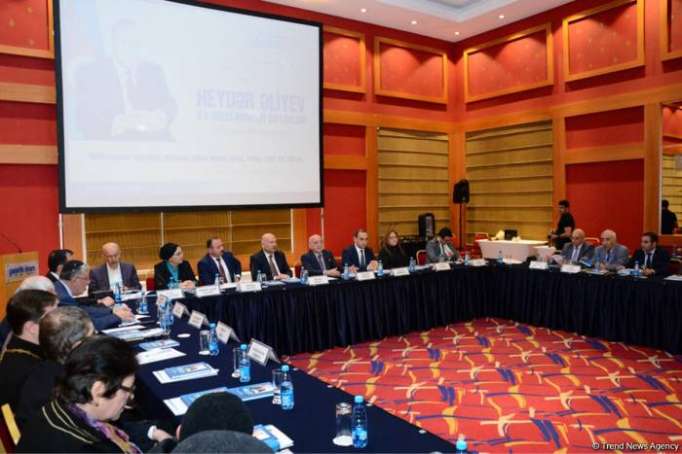 A conference titled “Heydar Aliyev and National-Spiritual Values” organized by Azerbaijan’s State Committee for Work with Religious Organizations and dedicated to the 95th anniversary of the national leader Heydar Aliyev is underway in Baku.

Officials of the State Committee, Senior Adviser of the Department for Interethnic Relations, Multiculturalism and Religious Issues of the Presidential Administration of Azerbaijan Jeyhun Mammadov, deputies of chairman of the Caucasian Muslims Office Salman Musayev, Fuad Nurullayev, Gemerkhanim Javadli, Chairman of the Religious Community of Mountain Jews of Baku Milikh Yevdayev, member of the Board of Trustees of the Foundation for Promotion of Spiritual Values ​​Bahruz Guliyev, President of the Jewish Community in Baku Aleksandr Sharovsky, Head of the Albanian-Udi Christian Community Robert Mobili, MPs, religious figures and representatives of the public are taking part in the conference.

Addressing the conference with an opening speech, Chairman of Azerbaijan’s State Committee for Work with Religious Organizations Mubariz Gurbanli noted the importance of the topic.

He spoke about the exceptional merits of the national leader Heydar Aliyev in preserving the relations between the state and religion, as well as national and spiritual values.