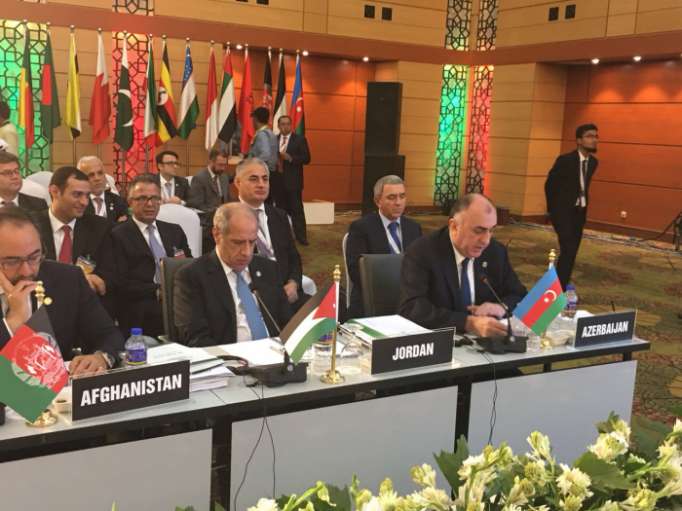 The UN, including its Security Council and OIC resolutions, which clearly recognize Armenia as an aggressor, must be the main message to all Muslim countries that want to develop relations with the invader, Azerbaijani Foreign Minister Elmar Mammadyarov said.

He was speaking at the 45th session of the Council of Foreign Ministers of the OIC.

“It is a confirmed fact, that as the result of military aggression by Armenia, 20 percent of internationally recognized territory of the Republic of Azerbaijan, including Nagorno-Karabakh and seven adjacent regions have been occupied as well as almost one millions of people have become refugees and internally displaced persons,” he said. “Numerous historical, cultural and religious monuments in the occupied territories of Azerbaijan have been brutally destroyed and humiliated. The UN, including its Security Council and OIC resolutions, which clearly recognize Armenia as an aggressor, must be the main message to all Muslim countries that want to develop relations with the invader because Armenia’s policy of occupation is an attack not only on Azerbaijan’s religious and cultural assets, but on historic and cultural legacy of Islam in general.”

“I would like to note with thanks the strong and just position of the OIC member-states with regard to the Armenia-Azerbaijan Nagorno Karabakh conflict, reflected in the OIC Ministerial resolutions,” he added.

“Azerbaijan is working consistently to promote Islamic values around the world and actively contributed to the organization of the Department of Islamic Arts in famous Louvre museum in France, and was the first Muslim country to demonstrate its exhibition in the Vatican,” he noted. “In 2009, Baku was declared the capital of Islamic culture. In 2018, Nakhchivan, another ancient Azerbaijan city, was awarded this honorary title. The opening ceremony of “Nakhchivan, the Capital of Islamic Culture-2018” event will be held on 20th June 2018 in the city of Nakhchivan with the participation of the Culture Ministers of OIC Member States.”

“Taking the opportunity, I would like to thank the OIC for the close cooperation to make a presentation on December 21, 2017 at its headquarters on Baku’s bid to host “World Expo-2025” and wish peace, stability, sustainable development and strong solidarity for our Ummah,” he added.

Speaking about the Rohingya Muslims, Mammadyarov said that their plight is one of the painful issues of the Islamic world, and remains one of the biggest refugee crises in the world.

“In 2017, Azerbaijan was one of the first countries to allocate 100 tons of humanitarian aid to Rohingya Muslims who are suffering as the result of mass violence and ethnic cleansing and we will continue our assistance to those who need it,” he said.

“Azerbaijan is deeply concerned over wars and armed conflicts in a number of the OIC Member States, which have led to greater security challenges, political instability in some regions, large-scale displacement and unprecedented humanitarian crisis,” he added. “Azerbaijan will continue to work intensively with the other OIC Member States through different OIC Contact Groups to which Azerbaijan is a member, namely Contact Groups on Palestine, Jammu and Kashmir and Muslim minorities in Europe.”

“The bloody clashes taking places on the Israel-Palestine border causes our deep concern,” Mammadyarov said. “We, Member States and OIC, have to put as much effort as possible to stop this bloodshed. Just as before, Azerbaijan declares its readiness to contribute to this matter and we reaffirm our full solidarity and our persistent support for the just and lasting solution to the question of Palestine. Azerbaijan stands for the two-state solution of the Palestinian conflict with East Jerusalem as the capital of the State of Palestine.”

On July 20-21, 2017, Azerbaijan hosted the International Conference on the Question of Jerusalem in Baku under the auspices of the UN Committee on the Exercise of the Inalianable Rights of the Palestinian People and with the support of the OIC, wihich has been concluded with the introduction of a communique on behalf of its organizers condemning the closure of the Al-Aqsa Mosque and restrictions on worshippers therein, he noted.

“On April 3-6, 2018, in the capacity of Non Alignment Movement (NAM) Troika, Azerbaijan hosted the 18th Mid-term Ministerial Meeting of the NAM, titled “Promotion International Peace and Security for Sustainable Development”,” he said, adding that as part of this event, the meeting of NAM Ministerial Committee on Palestine was organized.

Urgent calls for serious, collective efforts to bring a complete end to the violations were reiterated in the Final Baku Declaration, he noted.

“We are also planning to organize the Annual Ambassadorial Meeting of the State of Palestine accredited in Asia countries by the end of 2018 in Baku and I think it will be the next opportunity for discussing current challenges of the People and State of Palestine,” he said.

“Our future development depends on study and health of the Youth, on their employment,” he noted.

On April 17-19, 2018, the Delegates of the OIC Member States attended the 4th Session of the Islamic Conference of Youth and Sports Ministers in Baku which reiterated Islam as a religion of peace and underlined the importance of youth development, capacity building and increasing the role of the youth in promoting development, peace and safety in general among the Muslim communities, inspired by prioritization by “OIC 2025 Program of Action” of youth and sports issues for the global development agenda, particularly in OIC Member States, he added.