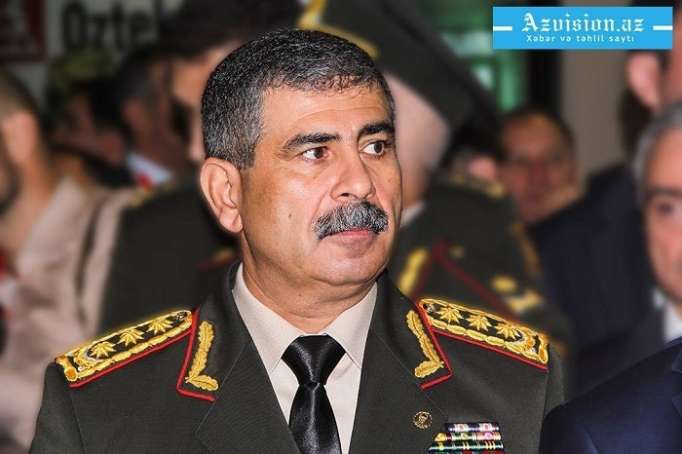 “The military balance between Armenia and Azerbaijan has changed dramatically in our favor,” he noted.

The minister stressed that the successes achieved in April 2016 in Aghdere, Fuzuli, Jabrayil and in counterattack operations in Nakhchivan in May of this year were possible thanks to the complex reforms carried out in the Army under the great care and attention of the Supreme Commander-in-Chief Ilham Aliyev.

"Both of the historic events that I mentioned clearly demonstrate that the Azerbaijani Army is far more superior to the Armenian army in terms of combat readiness, enthusiasm, morale and professionalism,” he said.

Hasanov stressed that the Azerbaijani army is equipped with new, modern and high-quality combat vehicles, as well as other military-purpose products manufactured in different developed countries in consideration of the region’s features, the situation and conditions along the front line, and in order to maintain military superiority over the enemy.

At the same time, the Azerbaijani army is equipped with local-made military products, the minister added.

Hasanov noted that along with its partners, Russia, Belarus and Ukraine, Azerbaijan also expands its military potential in cooperation with Turkey, Iran, Pakistan, Israel, South Africa and many other developed countries.

The minister noted that the exercises involved a large number of personnel, armored vehicles, missile and artillery units, aircraft and air defense units of the Air Force and anti-aircraft missile complexes equipped with modern air defense systems, naval vessels and boats of the Naval Forces, as well as special forces.

Hasanov recalled that large-scale exercises were conducted on the frontline in March this year in accordance with the plan approved by the Supreme Commander-in-Chief of the Armed Forces.

“The exercises involved about 25,000 personnel, about 250 tanks and other armored vehicles, up to 1,000 different types of missile and artillery pieces, rocket launchers and mortars, up to 50 different types of aircraft and helicopters. The aim of the exercises, which focused on the modeling of combat conditions and live fire, was to demonstrate the professionalism and combat capabilities of the governing bodies and troops and prepare for potential war," he added.