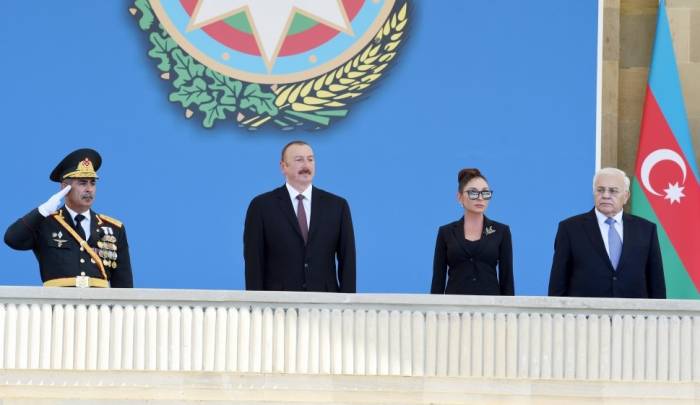 The war has not ended yet, only the first stage of war is over, said Azerbaijan’s President, Supreme Commander-in-Chief of Armed Forces Ilham Aliyev.

In 1993, Armenia, taking advantage of the incompetence of the AFP-Musavat authority, occupied Azerbaijani lands, said the president addressing the military parade on the Azadlig Square in Baku on the occasion of the 100th anniversary of Azerbaijani Armed Forces.

“According to international law, Nagorno-Karabakh is the land of Azerbaijan. The United Nations and other international organizations have adopted many decisions and resolutions in this regard. UN Security Council’s four resolutions demand an immediate and unconditional withdrawal of Armenian armed forces from the occupied Azerbaijani territories. These resolutions still remain in force,” the head of state said.

President Aliyev recalled that an act of genocide was committed against the Azerbaijani population in the town of Khojaly.

Azerbaijan will never accept the occupation of its territories and will restore its territorial integrity, the Supreme Commander-in-Chief stressed.

“We had to build a strong army and we did it. Today, the Azerbaijani army is among the world’s strongest armies. The establishment of a strong army needs a strong economy,” he said. “Azerbaijan’s economy has grown by 3.2 times over the past 15 years. We live at our own expense and don’t receive aid from anyone. We direct the funds acquired to the fulfillment of the tasks ahead. Army building is among our priorities. Military expenditures have increased by 15 times since 2003.”

The head of state said that tens of military towns were built in recent years.

“Eighty percent of military towns have been rebuilt and repaired. All military towns in the country will be repaired in the coming years. Our servicemen’s housing problems are solved. More than 20,000 civilians are currently employed in military units,” President Aliyev added.

The head of state noted that 100th anniversary of Azerbaijan Democratic Republic (ADR) was marked last month: "One of the main decisions of the ADR was to form an army. Unfortunately, ADR lost its independence after two years. This shows that to protect independence is harder than to achieve it.

Armenia conducted aggressive policy and occupied a part of our lands, internal conflicts generated threat to the independence.

Supreme Commander-in-Chief noted that there was not a regular army in the first years of the independence, separate armed groups could not defend outlands: "Therefore, it was necessary to form a regular army with the decision of nationwide leader. Foreign investment was involved in the country at that time, economic and political reforms stabilized the situation. Azerbaijan has been developing since 1993.

Building a regular army required economic opportunities. So, very serious reforms were conducted in Azerbaijan those years, attraction of foreign investments was ensured.

The political, economic reforms stabilized the situation and Azerbaijan has been moving forward on the path of development and progress since 1993. This policy continues today. The years 1993-2003 went down in our history as the years of stability and development.

Azerbaijan’s army is equipped with the most advanced technology and weapons. We purchased military patrol ships, air defence systems, tens of combat aircraft, more than a hundred military transport helicopters, the most advanced reconnaissance and combat unmanned aerial vehicles, artillery systems, long-range missiles, rocket launcher systems, operational and tactical missile systems. These increase our military power. We are doing all this to make the army stronger. The events taking place in the world show that international law does not work. If it worked, the lands of Azerbaijan would be liberated. There is no mechanism for decisions of international organizations to be fulfilled. The force factor acts as the main factor. Therefore, we are pursuing such a policy, and this is the right policy. Having established effective relations with friendly countries, we acquired the most advanced weapons. Azerbaijan will continue to acquire the most advanced types of weapons and equipment. To achieve this goal, we have the necessary links with friendly countries and financial resources.

Our army has high combating ability. Armenia committed provocation against Azerbaijani people two years ago, civilians faced aggression. Both military servicemen and civilians were killed. Azerbaijani army responded to the aggressor and liberated a part of Aghdere, Fuzuli, Jabrayil districts. As a result of successful counter-attack, thousands of hectares of lands are controlled by Azerbaijani army. Our flag is waving in Leletepe, mountains of Aghdere. The April fights once again showed that the Azerbaijani people will not reconcile with this occupation. We totally dispelled the myth about the Armenian army. We dispelled defence line, which they had created over the years, within a few days.

We are on the path of development. All paths, clear horizons are open in front of us. From now on, Azerbaijan will move only on the path of development. Armenia is unable and will not be able to compete with us. The historical justice, international law is on our side. We have an economic and military strength and spirit of patriotism. The April victories, the Nakhchivan victories strengthen the patriotic spirit of our army and our people, and once again instil the absolute belief in the Azerbaijani people that today the Azerbaijani army is capable of fulfilling any task and is ready for this,” said the head of state.

In the April 2016 battles and in the 2018 Nakhchivan operation, the Azerbaijani flag was raised on the lands liberated from the occupiers.

This is of great moral importance. These flags will be demonstrated today at this parade on the Azadlig Square. These flags led our army forward; these are battle flags. Today, these flags fly over the Azerbaijani lands, the lands liberated from the occupation, and have been brought here for this parade. There will come a day when the Azerbaijani flag, raised on the liberated lands that are under occupation today, will be brought to the Azadlig Square and will be demonstrated at a military parade. We should make and are making that sacred day closer,” said President Ilham Aliyev. 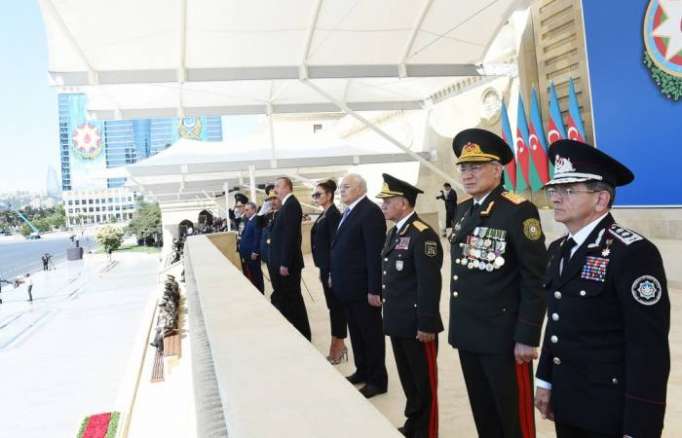 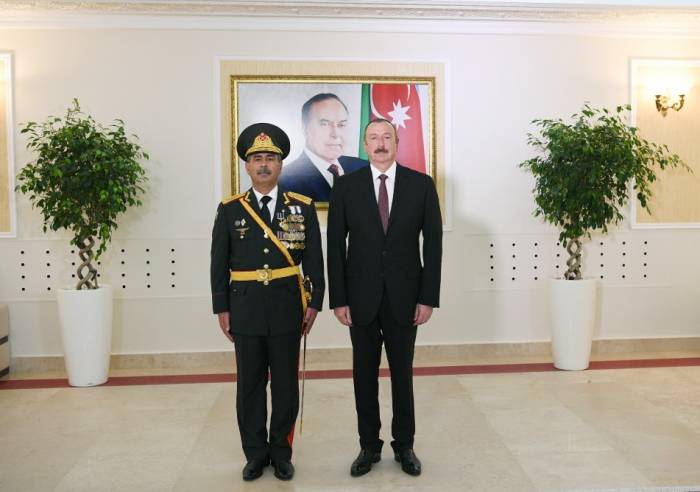 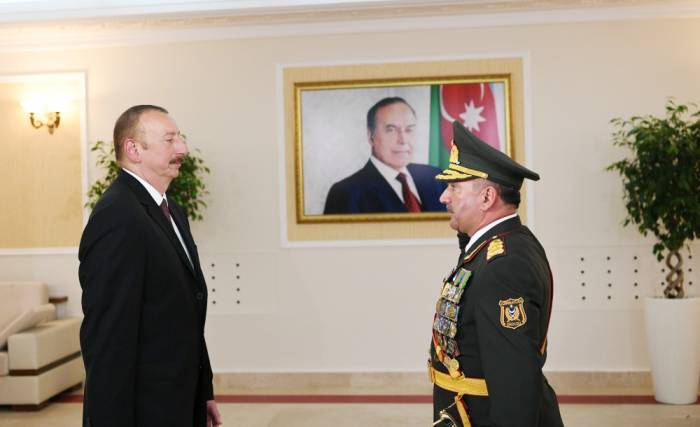 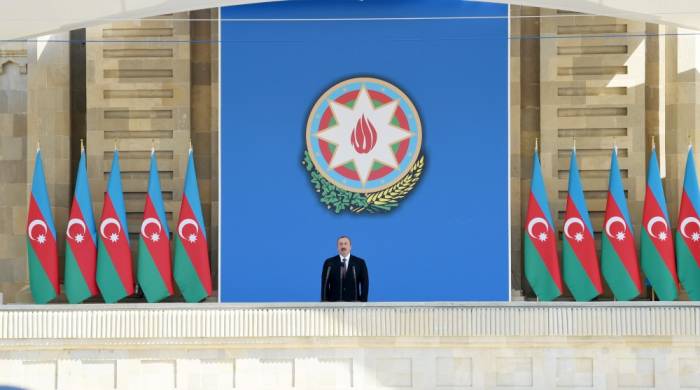 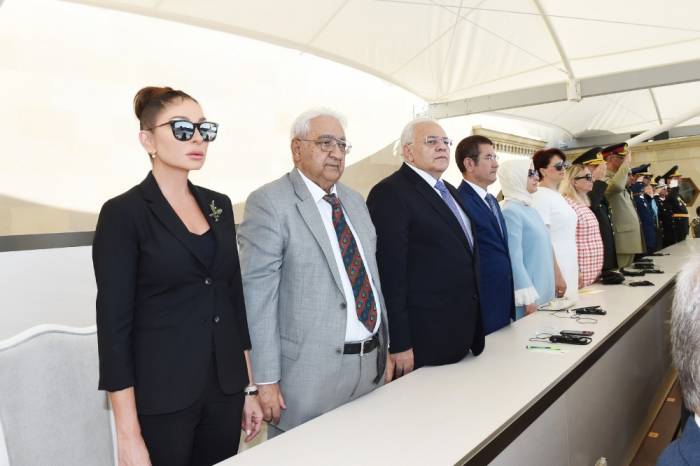 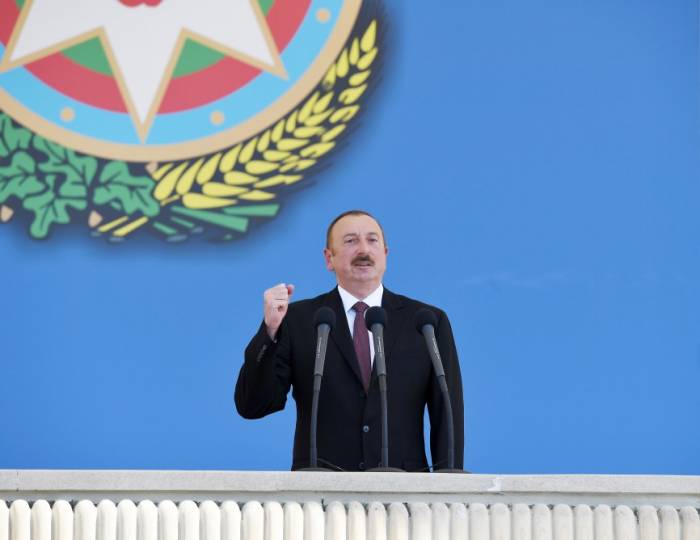 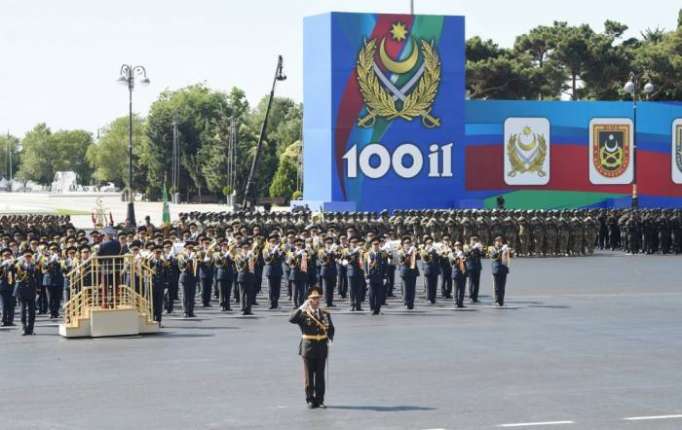 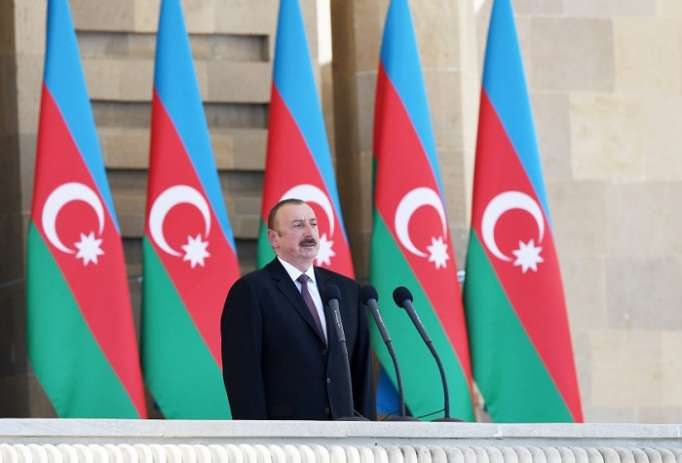 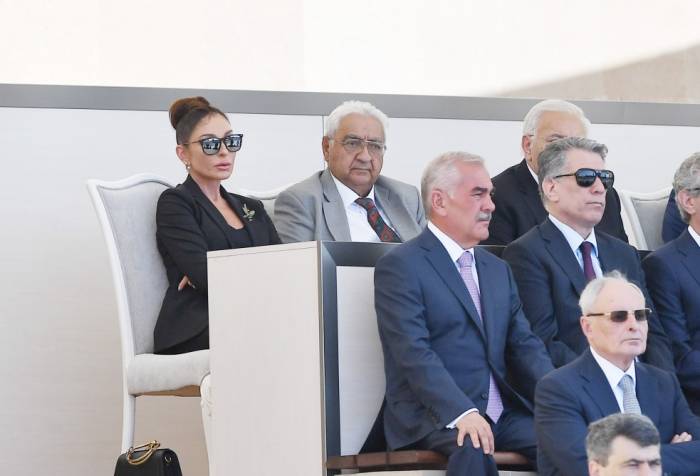 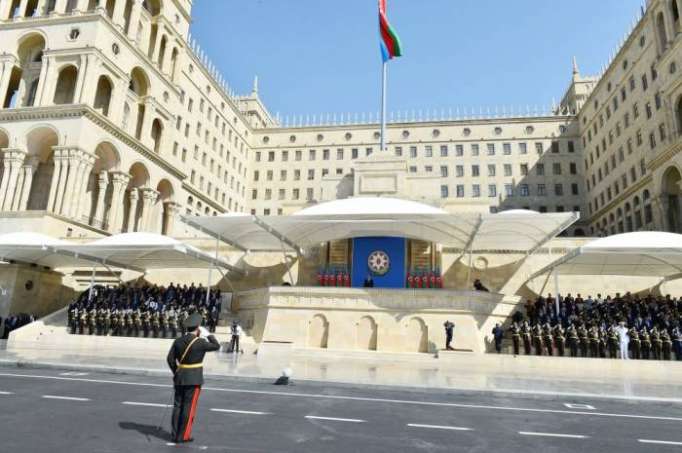 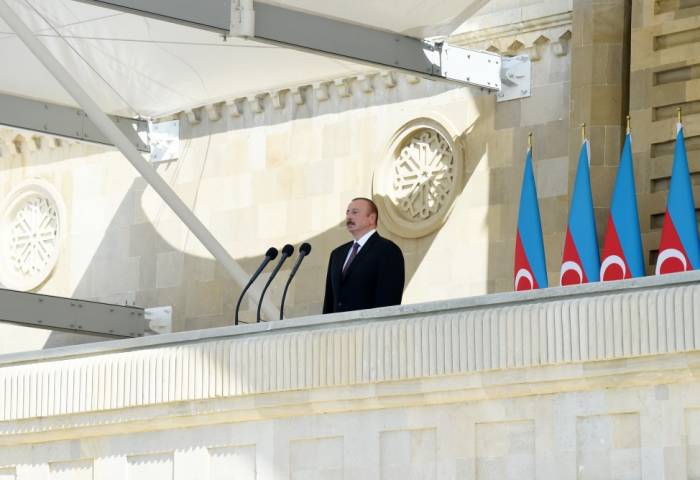 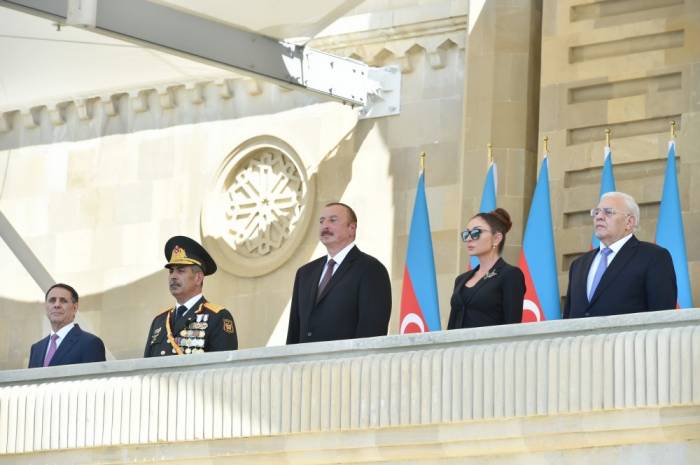 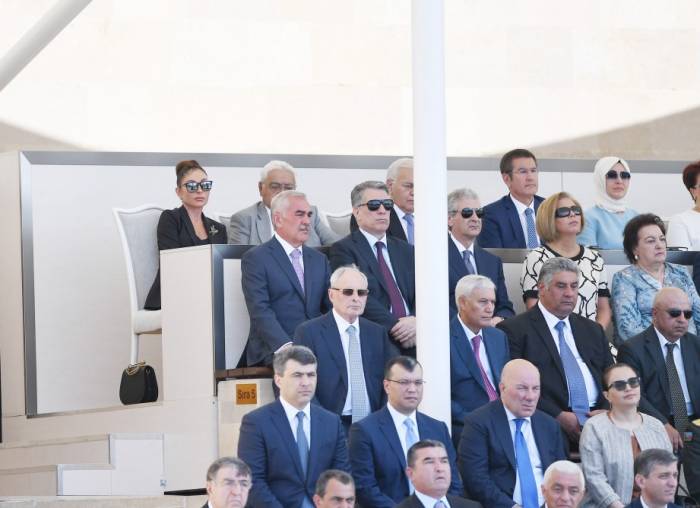 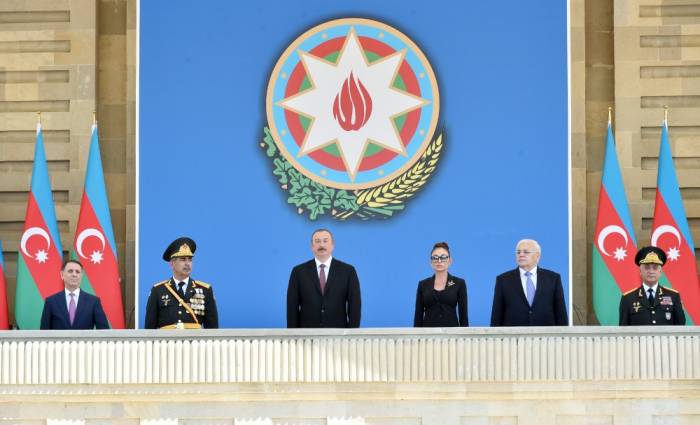 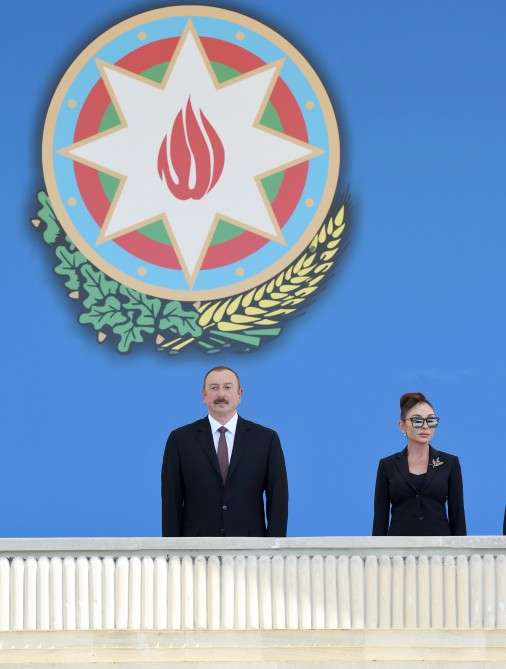 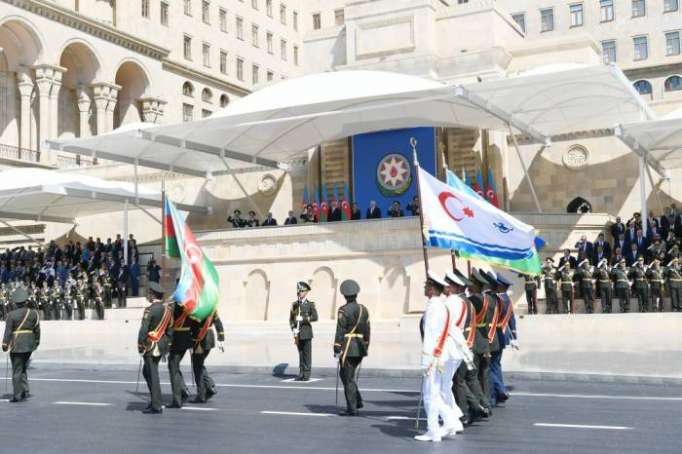 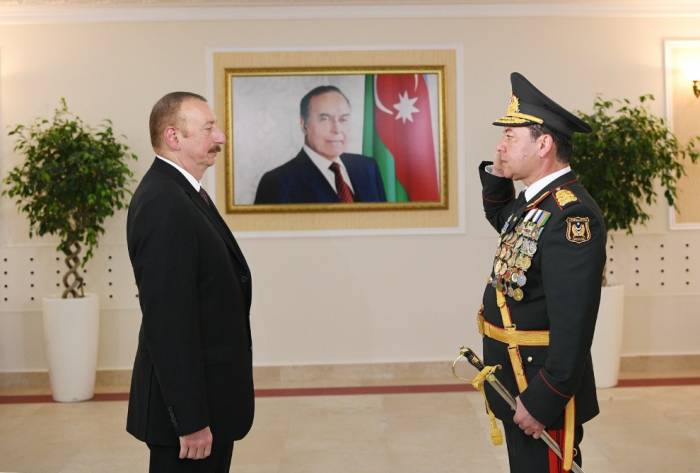 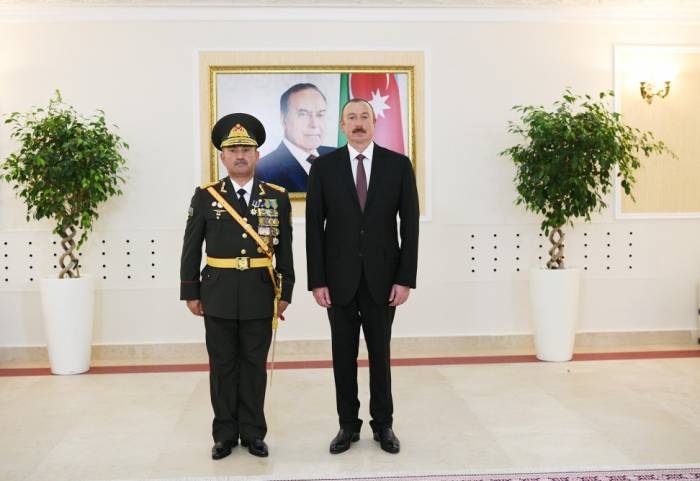 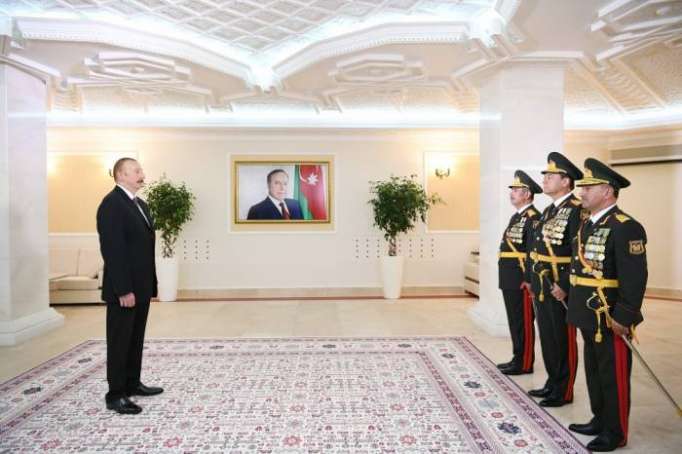 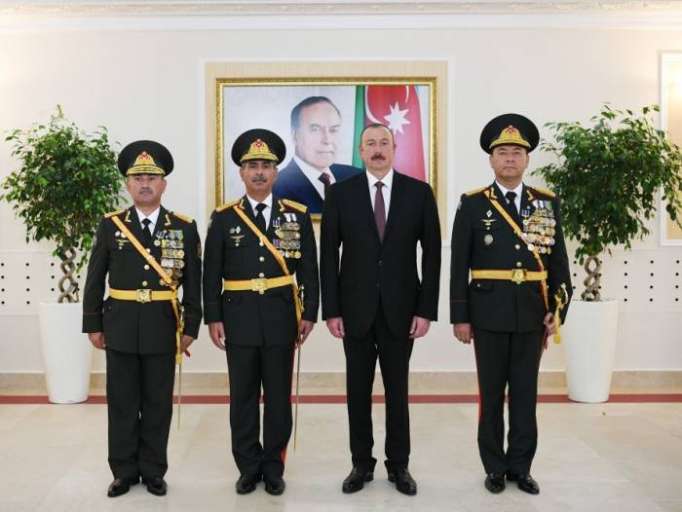 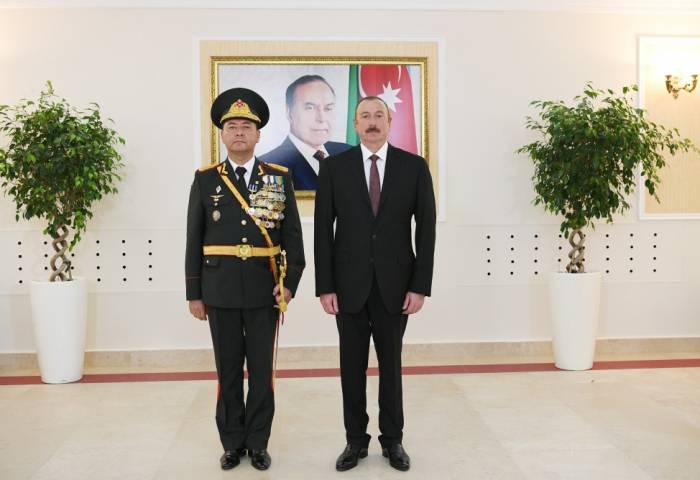