Status quo in Nagorno-Karabakh conflict must be changed – Hajiyev 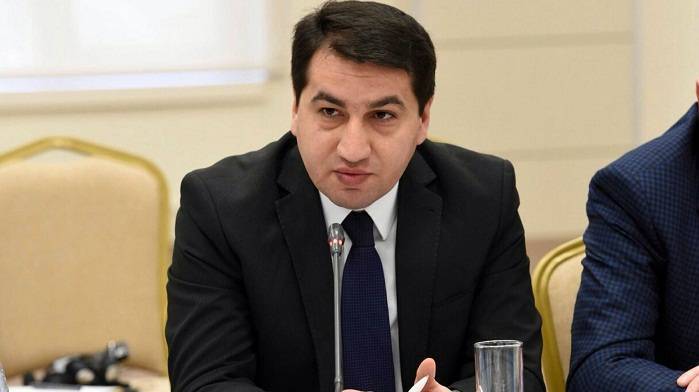 To achieve a political settlement of the Armenia-Azerbaijan Nagorno-Karabakh conflict, the occupation of Azerbaijani territories must be ended and the status quo must be changed, Azerbaijani Foreign Ministry spokesman Hikmat Hajiyev told a press conference on Monday, AzVision.az reports.

“At his last press conference, Armenian Prime Minister Nikol Pashinyan suggested that Azerbaijan should first announce its compromises on the settlement of the Nagorno-Karabakh conflict. After this, Armenia will provide information on its compromises,” Hajiyev said.

Despite the fact of occupation, holding negotiations with Armenia for over 25 years is Azerbaijan's biggest compromise, stressed Hajiyev.

"If Armenia is interested in resolving the conflict, then it must put an end to the fact of occupation and implement the relevant UN Security Council resolutions,” he added.

Dealing with the settlement of the Nagorno-Karabakh conflict is the OSCEMinsk Group, which was created after the meeting of the CSCE (OSCE after the Budapest summit held in Dec.1994) Ministerial Council in Helsinki on 24 March 1992. The Group’s members include Azerbaijan, Armenia, Russia, the United States, France, Italy, Germany, Turkey, Belarus, Finland and Sweden.