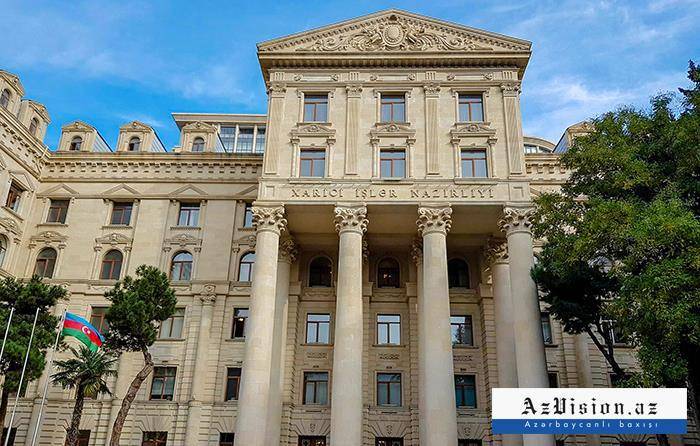 Hikmat Hajiyev spokesperson of Azerbaijan`s Ministry of Foreign Affairs commented on the article published in Eurasianet.org portal by journalist Joshua Kuchera headlined “For Armenians, they're not occupied territories – they're the homeland”.

In response to Kuchera`s article, spokesperson of Azerbaijan`s Ministry of Foreign Affairs Hikmat Hajiyev has sent an article to the editor of Eurasianet.org. The portal refused to publish Hikmat Hajiyev`s article.

“I am writing with regard to the article by Joshua Kuchera, journalist of Euroasianet.org entitled “For Armenians, they're not occupied territories – they're the homeland” published on August 6th, 2018. The article is about the occupation of Kalbajar region of Azerbaijan. However, the article only reflects the views of one side and does not provide a real picture of Kalbajar’s occupation.

Stealing someone else's property by use of violence and force and then calling it as yours is robbery. There is no other way to call it. Attempts to justify robbery are shameful and immoral act.

Kalbajar district of Azerbaijan was occupied by armed forces of Armenia in the course of unleashed war against Azerbaijan in April 1993. This year marks the tragic 25th anniversary of Kalbajar’s occupation. Kalbajar is located beyond administrative boundaries of the former Nagorno-Karabakh Autonomous Oblast (NKAO) of Azerbaijan. Offensive operation to occupy Kalbajar was mainly carried out from the territory of Armenia by use of heavy weaponry, Mi-24 helicopter gunships and advanced fixed wing aircraft. As a result of occupation, around 60.000 inhabitants of Kalbajar were subjected to ethnic cleansing. Occupation of Kalbajar put an effective end to Armenia’s continued denial of its responsibility as occupying power.

The United Nations Security Council adopted Resolution 822 in 1993, which reaffirmed “the inviolability of international borders of Azerbaijan and the inadmissibility of the use of force for the acquisition of territory” and “demanded immediate withdrawal of all occupying forces from the Kalbajar district and other recently occupied areas of Azerbaijan”. Instead of withdrawing its armed forces from the occupied territories of Azerbaijan as demanded by UNSCR, Armenia continued its aggression and occupied Agdam, Jabrayil, Gubadly, Fizuli and Zangilan regions of Azerbaijan in 1993. It clearly shows that Armenia’s real intentions were and continues to be territorial grab by use of force.

Armenia is responsible for internationally wrongful acts against Azerbaijan, several of which constitute serious breaches of obligations arising from peremptory norms of general international law.

Armenia, in blatant violation of the international humanitarian law, especially Geneva Conventions transfers settlers of Armenian origin to the occupied territories, including the Kalbajar district, with a view to changing demographic and ethno-cultural features of these territories. Armenia, also by involving dubious offshore companies illegally exploits minerals, including gold resources of Kalbajar in an aggressive manner. Such illegal acts according to the Geneva Conventions and Additional Protocols amount to war crimes.

Contrary to the basic rules of archeology and ethnography, quasi historians are also attempting to falsify history, including Christian heritage of Caucasian Albania with a view of presenting Kalbajar as Armenian land. Ironically, except few individuals, Armenians have never lived in Kalbajar as community. Against the background of all efforts of Armenia and Armenian diaspora, only few hundred people live or simply survive in Kalbajar town. The reason is simple – Kalbajar is occupied territories, not their homeland.

Unlike Alexander Kananyan who is referred in the article and moved to Kalbajar in 2000 Azerbaijani Dilgam Asgarov and Shahbaz Guliyev were born in Kalbajar and were taken hostage by armed forces of Armenia in 2014 while visiting graves of their parents. Currently, more than 70.000 Kalbajar residents are temporarily residing in different regions of Azerbaijan as internally displaced persons (IDPs). Teenager Turana Hasanli’s family, who was killed by armed forces of Armenia in April 2016, is one of such thousands of Azerbaijani families which are waiting to return to their native Kalbajar and exercise their right of property.

Derogatory allegations of Yelena Mkhtaryan, who self-identified herself as the representative of illegal regime, against Azerbaijanis and Muslims, as well as Muslim women in general, are inacceptable and racist. Azerbaijan is a secular and inclusive state with the rich traditions of multiculturalism. Armenia-Azerbaijan conflict has nothing to do with religion and is the territorial conflict. Armenian propaganda, being deprived from any political, moral and legal justifications for its ill actions against Azerbaijan, is in a dangerous manner now playing with the religious sentiments to win some support in the western world. I would like to remind to Yelena Mkhtaryan that occupation of others’ lands, subjecting innocent civilians to mass ethnic cleansing and plundering their properties are indeed real acts of terror, which we have witnessed in Kalbajar.

Azerbaijan will never reconcile with the occupation of its territories. Former president of Armenia Serj Sargysian’s regime failed to understand this reality. But, new administration of Armenia has to finally comprehend that the only way to achieve a durable and lasting political settlement of conflict is to ensure withdrawal of the Armenia’s armed forces from the occupied territories of Azerbaijan, the exercise by the forcibly displaced persons of their inalienable right to return to their places of origin in safety and dignity. By doing so new Government of Armenia will have a chance to demonstrate that it’s truly and not just in words, but in deeds committed to peace and international obligations of Armenia. Otherwise, all responsibility lies on Armenia.

Azerbaijan, as every other State, retains its inalienable rights under the Charter of the United Nations to exercise its right of self-defence with a view of restoring its territorial integrity and sovereignty within its internationally recognized borders and violated rights of its citizens.”