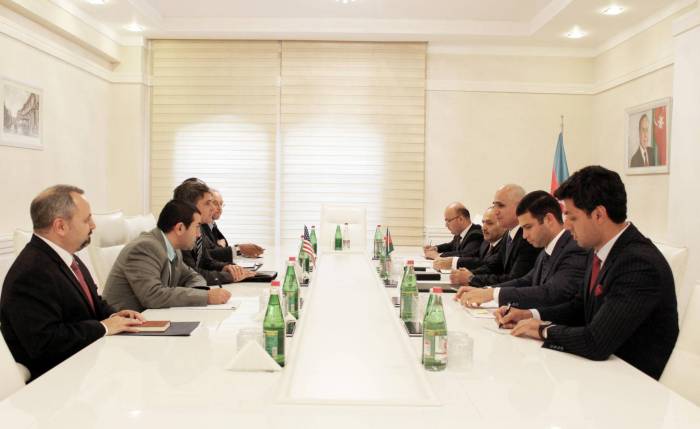 The USA has invested more than $13 billion in Azerbaijan's economy, of which more than $1 billion has been invested in the country's non-oil sector, the Minister of Economy of Azerbaijan Shahin Mustafayev said Sept. 8 at the meeting with Brian McFeeters, Principal Deputy Assistant Secretary, Bureau of Economic and Business Affairs.

The United States Agency for International Development (USAID) has allocated $350 million for the implementation of a number of projects in Azerbaijan.

"Currently, 240 American companies operate in the sphere of industry, construction, communications, banking sector and other areas of Azerbaijani economy. The US is one of the main foreign trade partners of Azerbaijan. The trade turnover between the countries for January-June 2018 amounted to $476.1 million," Shahin Mustafayev said.

The minister noted during the meeting that the relations between Azerbaijan and the United States are developing successfully, the successful cooperation is being carried out in the spheres of economy, energy, transport, education, agriculture, security, fight against terrorism and other spheres. It was noted that the necessary legal framework exists for the development of cooperation between the two countries.

In the framework of the "Socio-Economic Development Activity" (SEDA) project jointly funded by the Government of Azerbaijan and USAID, the feed processing plant has begun to operate in the Jojug Marjanli village of Jabrayil region.

Shahin Mustafayev noted that one of the priorities of Azerbaijan's economy is the development of the non-oil sector and there are ample opportunities for investment in industry, pharmaceuticals, agriculture, trade, transport, etc. The American companies, he said, can also take advantage of acceptable conditions for investors created in Azerbaijan to participate in activity of industrial parks and districts.

The minister noted the great experience of the United States in the field of small and medium-sized businesses and added that the Agency for Small and Medium Business Development has been established in Azerbaijan. Shahin Mustafayev noted the importance of exchange of experience in this field, as well as the organization of business forums, export missions with the participation of the business community to expand trade relations.

Principal Deputy Assistant Secretary, noting the purpose of the visit to the country i.e. the participation in the Azerbaijan Competitiveness Forum, expressed satisfaction with the organization of the Forum at a high level, the participation of American companies in its work.

McFeeters also said that the US welcomes the work done in the field of diversification of the non-oil sector, the development of entrepreneurship in Azerbaijan. He noted that the American companies are also interested in expanding cooperation in agriculture, tourism, alternative energy and other fields.

Also the views on other issues of mutual interest have been exchanged at the meeting.