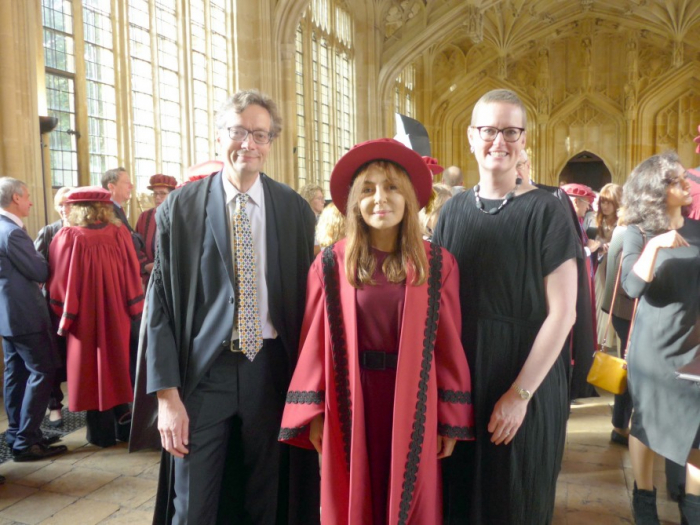 Rector of the Baku branch of Moscow State University, ANAS vice-president, head of Nizami Ganjavi Scientific Centre at the University of Oxford on behalf of Azerbaijan (www.orinst.ox.ac.uk/nizami-ganjavi-programme-study-languages-and-cultures-azerbaijan-and-caucasus), chair of the Board of Trustees of the British Foundation for the Study of Azerbaijan and the Caucasus (www.bfsac.org.uk), academician, Nargiz Pashayeva has been admitted as a permanent member of the University of Oxford Chancellor’s Court of Benefactors (CCB), which is headed by Lord Patten Barnes.

Professor Nargiz Pashayeva attended the 28th annual ceremony of the Chancellor’s Court of Benefactors to receive the honorary title at the invitation of the Chancellor of the University of Oxford Lord Patten Barnes. The event featured a ceremonial implementation of a remarkable decision which went down in the history of the University of Oxford. By the decision of the University of Oxford management and Scientific Council, the name of the British Foundation for the Study of Azerbaijan and the Caucasus was engraved on the Memorial Plaque on the Arch of the 17th century Clarendon Building as a permanent member of the Chancellor’s Charity Commission. Names inscribed on the arch include world-renowned scientists, public figures and prestigious organizations (www.oxfordhistory.org.uk/broad/buildings/south/clarendon.html).

Members of the Chancellor’s Court of Benefactors may have their generosity honoured by having their name engraved in the Clarendon Arch, near the entrance of the historic Bodleian Library (www.bodleian.ox.ac.uk).

The Clarendon Building was built in 1711–13 to the designs of Nicholas Hawksmoor. It was built to house the Oxford University Press, which had previously been occupying a large room over the ceiling of the Sheldonian Theatre. It owes its name to the fact that it was partly paid for by the profits from the History of the Great Rebellion by Lord Clarendon, whose son presented the University with its copyright. It was known as “The Printing House” until the University Press moved to Walton Street in 1832.

The Clarendon Building was then taken over by the Bodleian Library, and it now houses their admissions department and the Victoria County History of Oxfordshire.

The names of the University’s distinguished past donors including Sir Thomas Bodley, Queen Elizabeth I, John Radcliffe, King Henry VIII, Sir Ernest Oppenheimer, Queen Elizabeth II, and Cecil Rhodes have been engraved on the Clarendon Arch so far.

Professor Nargiz Pashayeva was honored in recognition of her work as well as the activities at the Nizami Ganjavi Scientific Center established at the University of Oxford on her initiative.

According to the tradition, this year saw a special ceremony at the Divinity School during which Professor Nargiz Pashayeva was handed a mantle and headwear. Following the ceremony, members of the Chancellor’s Court of Benefactors met with Chancellor Lord Patten Barnes and posed for photographs together with him.

During the solemn ceremony of the Supreme Council of the University, a public orator noted that the British Foundation for the Study of Azerbaijan and the Caucasus is represented at the Chancellor’s Court of Benefactors by Professor Nargiz Pashayeva.

Following the solemn ceremony, the presentation of the Memorial Plaque at the Clarendon Arch was held.